Father (by Agnarr)
Grandfather (by Elsa and Anna)

Plotting against the Northuldran people.

Subjugate or destroy the Northuldran people to his rule (failed).

King Runeard is the posthumous main antagonist of Disney's 58th full-length animated feature film Frozen II and the overall posthumous Greater-Scope Villain of the Frozen franchise. He is the former King of Arendelle, the father of King Agnarr and the grandfather of Queen Elsa and Princess Anna. As opposed to his son and granddaughters who are benevolent monarchs, Runeard is a ruthless tyrant who plotted to exterminate Northuldran people out of fear of their association with magic.

He was voiced by Jeremy Sisto, who also played Talon in Batman vs. Robin.

As first, Runeard was seemingly presented out as a benevolent and peaceful ruler as he welcomed the Northuldrans and built up a dam to act as a bridge of peace between both Northuldra and Arendelle; even his son Agnarr and his granddaughters Elsa and Anna revered and idolized him as a great ruler.

However, this was all a facade that Runeard made up to hide his true nature as a sadistic, arrogant, racist and selfish tyrant who is determined to expand his power by all means necessary. It also turns out that Runeard hated the Northuldrans due to their connection in magic, as he believes that magic makes people too powerful that would threaten his legacy as a king. It also turns out that he only built the dam in order to weaken the Northuldrans' resources so that he could force them into his rule; this was evident of when he murdered the Northuldran tribe leader for developing suspicions over the dame before sparking a war against the Northuldrans to cover his tracks.

However, Runeard's arrogance proved to be his downfall as the war he instigated against the Northuldrans led to him falling to his death on a cliff and causing the angered spirits to cast a curse on the land for decades. His legacy also left both Elsa and Anna heartbroken and outraged after learning his true colors until they broke the dam to end the curse and save both Arendelle and Northuldra.

Years prior to the events of the film, Runeard ruled the Kingdom of Arendelle and at some point married a woman named Rita, who became his Queen. Together, they had Prince Agnarr, their only son and heir. It's unknown what happened later to Queen Rita, but it seems that she passed away, possibly when giving birth to Agnarr. According to the tie-in novel Frozen: Forest of Shadows, Runeard oversaw the construction of the modern Arendelle Castle when Agnarr was just a boy.

When Agnarr was 14 years old, the tribe of Northuldra, who lived in the Enchanted Forest north of Arendelle in harmony with the elemental spirits who also resided there, made peace with Runeard and his kingdom, with Runeard and his men frequently meeting with them because of this. He also gets his men to build up a dam in the Enchanted Forest, supposedly designed to help the Northuldran people and bring prosperity to their land.

However, in truth, Runeard actually feared and despised the Northuldrans, believing that their association with magic made them too entitled and that they could potentially threaten his power as king. It also turns out that the dam was only created to reduce the Northuldrans' resources in order to weaken them so that Runeard could subjugate them to his rule.

When the Northuldran leader developed certain suspicions over the dam, Runeard declared that they would discuss this in private, where he would attack the leader from behind and kill him. Runeard then claimed to his kingdom that the Northuldrans attacked him, and a battle broke out between the Arendellian soldiers and the Northuldran people, during which Runeard was driven to a cliff and fell to his death. The spirits of the Enchanted Forest, enraged by the fighting, cursed the forest by enveloping it in a mist that would keep anyone from leaving or entering, trapping the Northuldran people and Arendellian soldiers inside. Prince Agnarr managed to escape the mist with the help of a Northuldran girl named Iduna, whom he would later marry upon inheriting the throne of Arendelle, thus becoming the new King and Queen.

In the following years, Runeard posthumously became a grandfather with the arrival of Elsa and Anna. Due to Queen Iduna's selfless act during Runeard's attack, however, the elemental spirits rewarded Elsa with ice powers. Years later, King Agnarr would tell his daughters Elsa and Anna about the story of the Enchanted Forest, unaware that Runeard had actually started the conflict that sealed it off from the world in the first place. Upon learning about Elsa's powers, King Agnarr and Queen Iduna sailed off to find a mystical river called the Ahtohallan that holds all explanations of the past in hopes seeking answers to Elsa's powers. However, both Agnarr and Iduna perished in a shipwreck caused by a violent storm, leaving Elsa to take over as the new Queen of Arendelle.

Three years following the arrest of Prince Hans and the exile of the Duke of Weselton and his thugs for the attempted murder of Elsa, the stakes changed when Elsa, upon hearing the call of a mysterious voice and accidentally awakening the elemental spirits, travels to the Enchanted Forest alongside Anna, Olaf, Kristoff and Sven. There, they met the trapped Northuldran people and Arendellian soldiers, learning of her mother's heritage and encountering the different elemental spirits in the process. While travelling towards the Ahtohallan, Elsa, Anna and Olaf discover Agnarr and Iduna's shipwreck, realizing that they had perished trying to reach the Ahtohallan themselves and find answers about Elsa's powers. Believing that her powers are the reason why both Agnarr and Iduna died, a guilty Elsa forced Anna and Olaf away and seek out the river by herself. Upon reaching it, Elsa views the past and finds out that Runeard was responsible for the forest's curse by killing the Northuldran leader and instigating the war in the first place. Horrified of the fact that her grandfather is a ruthless tyrant who allowed his own fear and hatred to cloud his judgement over the trust of others, Elsa furiously abandons whatever respect she had for Runeard and sends the information to Anna before freezing as a result of venturing into the most dangerous part of Ahtohallan.

While trying to find a way out of the cave she and Olaf had become trapped in, Anna receives Elsa's message in the form of an ice sculpture of Runeard about to murder the Northuldran leader. Realizing what a heinous scoundrel that her grandfather truly is and seeing that Olaf is fading away due to Elsa's fate, Anna reluctantly concludes that the dam must be destroyed to end the curse, knowing that doing so would result a flood that would destroy Arendelle. Upon escaping the caves, Anna provokes the Earth Spirits into chasing her to the dam and explains the truth about Runeard's crimes to Lieutenant Mattias and the other Arendellian soldiers to get their help, thus getting the Earth Spirits to destroy the dam with boulders. This lifts the mist from the Forest and saves Elsa in the process, reviving Olaf and allowing Elsa to save Arendelle from the ensuing flood.

With the curse finally lifted, Elsa decides to remain in the Enchanted Forest as its new protector while promoting Anna as the new Queen of Arendelle, thus bringing true peace to both Arendalle and Northuldra and ending Runeard's dreadful legacy for good. 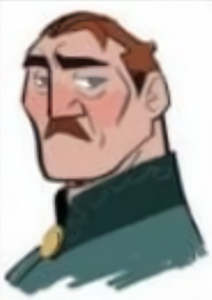 Portrait of Runeard from The Art of Frozen 2. 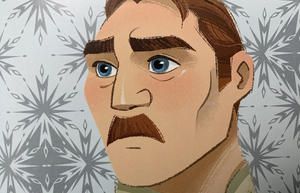 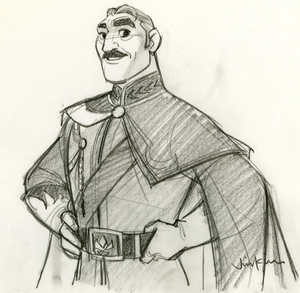 Runeard concept art by Jim Kim.
Add a photo to this gallery

Retrieved from "https://villains.fandom.com/wiki/King_Runeard?oldid=3415922"
Community content is available under CC-BY-SA unless otherwise noted.