Enjoying being a rich king.

Get the Wishing Star and execute the Warner Siblings. (failed)

King Salazar (also simply known as Salazar) is the main antagonist of the Animaniacs film Wakko's Wish. He is the greedy and arrogant king of Warnerstock.

He was voiced by Paxton Whitehead, who also played Dr. Phillip Barbay in Back to School.

Upon the death of the king, Sir William the Good, Warnerstock enters a state of civil war. Taking advantage of the situation, the neighboring fictional kingdom of Ticktockia (a parody of Time Inc., at the time of its merger with Warner Communications), lead by King Salazar the Pushy, takes over Warnerstock, and makes all its people poor and miserable due to overtaxing.

Wakko, saddened about Dot's illness, tries wishing upon a star. A fairy (who calls himself a "desire fulfillment facilitator") falls from the star he picks and explains that Wakko had just chosen the only wishing star in the sky. The star itself (which Rita and Runt witness) falls shortly after in the mountains and the fairy tells Wakko that whoever touches the star first gets one wish. The following morning, the siblings tell the whole town about the star in their excitement, which makes them all rush towards the glow in the mountains. King Salazar finds out about the star, orders Taxman Plotz to stop the Warners from reaching the star alive, and orders his troops to head to the star first and secure it. When he learned they escaped, he remarks "Just like their parents, I should've gotten rid of those kids years ago when I had the chance.", hinting that he probably killed their parents during his invasion. As the King approaches the star and is about to make his wish, that the Warners would leave him alone forever, the Warners show up, and he tries shooting them himself with a cannon. He misses, but Dot seems mortally wounded by the force of the explosion created when the cannonball hits the ground. Wakko seizes his chance to head to the star, and Yakko drops behind, trying to convince Dot that she can make it. Yakko then tells Dot the story of how Dot was born one last time, Dot then seemingly dies, causing the people of Acme Falls to cry in sorrow, along with some of the royal army, who become furious with King Salazar for his cruel nature. As everyone turns on the King, Wakko reaches the star. Dot reveals that she had been acting and was not actually injured, while Wakko wishes for two ha'pennies.

They then boot Salazar out of their palace (literally) where he is attacked by his own dogs. It was revealed that he killed Yakko, Wakko and Dot's parents and took the castle and threw the three kids away to the orphanage to be sure to not see them again.

It is unknown what has happened to Salazar afterwards. 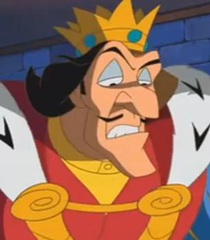 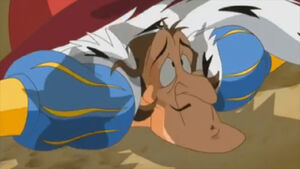