Sir Edmund Dorrance, better known as King Snake, is an antagonist in DC Comics. He is a terrorist and revolutionary who has been an adversary of Batman and Robin. He was the main villain of the original Robin spinoff series about Tim Drake and the father of Bane.

Edmund Dorrance started out as a British native who first distinguished himself in the Royal Artillery (a corps of the British Army). He and some friends then became mercenaries, offering their professional expertise to various anti-communist rebels, and made considerable money in doing so. While in Santa Prisca working with local rebels, his camp was taken by surprise by government commandos and Edmund was blinded by gunfire. He fled the country, leaving for dead a female rebel he had slept with. The woman was actually alive and pregnant with Edmund's son. Both she and her child were imprisoned for Edmund's crimes against the Santa Prisca government, with the child growing up in prison to become the villainous Bane.

Edmund subsequently moved to Hong Kong and used the money he had acquired to start a double life. To the public, he was a Hong Kong businessman worth millions, with interests in shipping, backing, and electronics, while in secret he was one of the most feared men in Asia, a giant in the heroin trade. Taking on the name King Snake (after a snake known for its immunity to other snake's venom, and a habit of eating other snakes), he found willing soldiers in the Ghost Dragon Chinese youth gang of Macau, Kowloon, and Hong Kong. Although he had a strong power base in Hong Kong, he could not hope to stay when the island was handed over to China. He began extending his interests into France and the United States. A Jingoistic man, he felt that Hong Kong had been made into a great city purely due to British influence, and decided to lay waste to the city rather than have it be soiled by falling into Chinese hands. His plans to release a Nazi-developed plague after leaving Hong Kong were foiled by Robin (Tim Drake). At the time, Tim was working with former DEA agent Clyde Rawlins, and the deadly martial artist Lady Shiva. The United States had attempted to stop Sir Edmund's expansion into America, to no avail. Edmund had killed Rawlins' family in retaliation, and Rawlins himself went rouge in order to pursue King Snake outside the law. Lady Shiva, meanwhile, sought King Snake because he was rumored to be the deadliest male martial artist in the world, and she wished to face him in battle. They eventually stormed King Snake's skyscraper headquarters and defeated, though Rawlins died in the attempt and Shiva mostly watched the proceedings. Robin knocked Sir Edmund out a window, and Shiva ordered Robin to kill King Snake while he hung from the building. Robin refused to do so and left, believing Edmund dead. Presumably, Shiva either let Edmund fall or else threw him off the ledge of the building to die. King Snake actually landed on a parapet. Shiva examined him, and satisfied that he had broken his back and was thus no longer a threat, left him.

After having his spine reinforced and regaining mobility, Sir Edmund moved to Gotham City, where he wrested control of the Chinatown district from the Triad gangs, revealing himself to be alive, and initially focussing on Robin for revenge (although his memories of the battle in Hong Kong were muddled, he eventually remembered that it was Lady Shiva that was most responsible for his defeat there, although he still remained hostile to Robin). Not long after, however, he lost power in a gang war, with his own Ghost Dragons rebelling and the Triad gangs sending assassins (such as the Silver Monkey and the Brotherhood of the Fist) after him.

King Snake survived and joined the international terrorist cult Kobra. He took advantage of a leadership struggle in that organization, with the previous "Lord Naja-Naja" disgraced, and Danny Temple (a friend of Robin's) was revealed to be the next in line for leadership. Temple was abducted and taken to a cult. During the ceremony intended to invest Temple with leadership, however, King Snake rebelled, declared himself the next Naja-Naja, and his followers healed his eyes in a Lazarus Pit the cult has access to (which could only be opened by Temple, explaining Sir Edmund's subterfuge). His eyesight restored, Sir Edmund battled against Robin (who was attemptCultto rescue Danny Temple), while Kobra (the prior leader of the cult) attempted to regain control of the Kobra cult. Luckily for Robin, Sir Edmund was unaccustomed to seeing, actually throwing his fighting style off. A vial of cobra poison used in the Kobra-cult initiation ceremony was knocked over, and in his attempts to warn King Snake, Robin accidentally caused the villain to be blinded a second time. Robin and Danny Temple escaped, while King Snake was left trapped in the base with no escape.

After a significant amount of time, the villain Bane finally learned the identity of his father and tracked King Snake down to the mountain base. Sir Edmund had survived months alone, and was barely alive and severely malnourished. Bane was emotionally conflict during the reunion, and apparently intended to kill his father several times, but did not. King Snake tried once more to seize control of the Kobra Cult, this time with his son at his side. After Robin and Batman intervened, however, Bane sided with them. In the resulting struggle, King Snake was knocked down a deep crevice, apparently dying.

During the Blackest Night crossover, King Snake is among the many deceased villains that receive a black power ring and is reanimated into a Black Lantern. He takes a leadership role among the Black Lanterns, coordinating Black Lantern strikes throughout Gotham City. 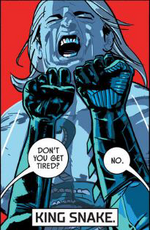 Edmund Dorrance was revived during DC Rebirth and appeared as one of the villains defeated by Batman and Catwoman.

The King Snake has no superhuman powers however he is a master of several of the world's deadliest martial arts. He kills without conscience and has earned the title of "the most dangerous man alive". The King Snake is also blind but has made it an asset rather than a handicap, as he has honed all of his other senses to an uncanny degree. He uses the dark as his weapon. After falling onto a parapet, his spine was reinforced with steel, give him some added degree of durability. As a Black Lantern, and possesses basic Black Lantern abilities.