King of the dolphins

Get revenge on humans for banishing his people to the ocean (failed).

Return to the land and banish humans to the ocean (succeeded).

King Snorky (also simply known as Snorky) is the main antagonist of the "Treehouse of Horror XI" segment, The Night of the Dolphin. He is the evil king of the dolphins that Lisa released into the wild.

The Night of the Dolphin

At the time, Lisa was unaware of both his sentience and maliciousness as she had only witnessed him being mistreated by the guests at the ocean park Snorky was housed and as such decided to free him out of sympathy. This degradation along with humanity's less than stellar treatment of dolphins served as the primary reason for his genocidally misanthropic hate.

Once being released, Snorky took control over his army of dolphins again and they started killing people swimming in the sea. Encouraged by their success, the dolphins eventually dared to leave the ocean and after marching towards the town on their caudal fins, they continued with killing random citizens.

Snorky interrupted the town meeting and took the stage instead of Mayor Quimby. He revealed himself to be able to speak English and in the following speech he explained the dolphins used to live on land, but were vanished to the ocean by humans. As dolphin king, he then banished all humans to the ocean. However, the citizens chose to resist instead and began a terrible battle which they lost, causing Snorky's dolphins to kick them to the ocean definitely.

The Simpsons Game presents an alternate account of Snorky's invasion. In this game, the Dolphins invade Paradise Pier as part of Kang and Kodos' attack on Springfield. After successfully invading the Pier, he is confronted by Bart Simpson, Lisa Simpson and The Sea Captain. He is killed after being dropped into an electrified tank of water three times or in the Wii version, placing an electric eel once to his tank. He is later seen in Heaven, assisting God in his attempt to defeat the Simpsons in the final boss level.

The Simpsons: Tapped Out

Snorky can be bought in Tapped Out for 5250 Go. Tapped Out continues the story-line from The Night of The Dolphin, with Homer attempting to make peace with King Snorky by bribing him with a can of tuna. 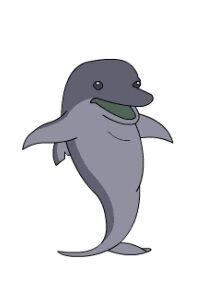 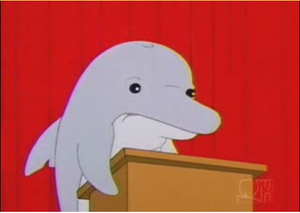 Retrieved from "https://villains.fandom.com/wiki/King_Snorky?oldid=4052581"
Community content is available under CC-BY-SA unless otherwise noted.