Attacking his enemies, Unleashing magical question marks from his sceptre, Burying Power Rangers up to their necks in sand and leaving them to their fate.

To destroy the Power Rangers.

Monster
King Sphinx was a Pharaoh-like Sphinx monster created by Finster on Rita Repulsa's orders and a villain in Mighty Morphin' Power Rangers. He could send away other beings with his wings. He also wields a scepter with a gold question mark on the end, which emitted flaming question marks.

He is voiced by Richard Cansino.

Finster supposedly created him from a handful of Egyptian sand, which he threw into the clay mold while making the monster's model. At Rita's request, Finster made King Sphinx for the sole purpose of defeating and destroying Jason the Red Ranger, so that the Power Rangers could be destroyed quicker without their leader to guide them. When the Black, Pink and Red Rangers arrived at the Children's Theater in the park to confront the monster and Putties, King Sphinx flapped his wings and sent the Pink Ranger away to the Youth Center's Gym and Juice Bar. After sending the Black Ranger away next, he teleported away with the Red Ranger to a mountainous desert to fight one-on-one. They seemed evenly matched in combat at first, but, even with the assistance of Goldar later in the battle, the Red Ranger started to get the upper hand over King Sphinx. Rita then made King Sphinx and Goldar grow to crush the Red Ranger. After finding Red Ranger's location, Zordon was able to use Jason's Power Sword to send him the Power Crystals so he could allow the other Rangers to arrive and summon their Zords. King Sphinx fought with Goldar mostly while the Zords were in the Megazord tank mode, but once it transformed into Battle Mode, the monsters (and even Rita herself) became very worried. King Sphinx and Goldar fought Megazord together, but after a lengthy battle, the monster was finally destroyed by the Megazord's Power Sword.

Though he would not be seen again on the show again physically, an illustration of King Sphinx would be featured in a page of Finster's monster book in the season one episode, "Happy Birthday, Zack". He is shown on a page next to the page that features a drawing of the Genie monster. In "Island of Illusion, Part II", a flashback of footage from "A Pressing Engagement" is shown when Jason recalls his fight with King Sphinx and beating the monster in order to keep from fading away into nothingness.

Though King Sphinx only appears in his debut episode "A Pressing Engagement", footage of the Goldar/King Sphinx fight from that episode can be seen in a few season one episodes, including the pilot "Day of the Dumpster" and "Crystal of Nightmares", due to repeated scenes. Sometimes when Megazord attacks Goldar, King Sphinx can be briefly seen with Goldar being struck with a shower of sparks.

King Sphinx was originally named Fly Guy in the (originally) unaired pilot for "Mighty Morphin' Power Rangers", which would later air as "The Lost Episode". Because of his appearance in the unaired pilot, King Sphinx became the most featured non-regular villain character to appear in art for much of the franchise's merchandise, including coloring books, board games and an eight-inch action figure.

King Sphinx was originally named Fly Guy in the (originally) unaired pilot for Mighty Morphin' Power Rangers. He was also the most featured non-regular villain character to appear in art for much of the franchise's merchandise, due to his appearance in the original unused pilot. According to the Mighty Morphin Power Rangers CD-Rom, King Sphinx's hobby was burying Power Rangers up to their necks in sand and leaving them to their fate. His weakness was listed as rain, which could dissolve him into a puddle of sand. 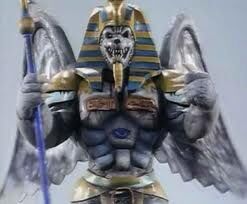 King Sphinx
Add a photo to this gallery

Retrieved from "https://villains.fandom.com/wiki/King_Sphinx?oldid=3965487"
Community content is available under CC-BY-SA unless otherwise noted.