Moving statue
The King Statue (also known as the Pig King Statue or Porky Statue) is an optional boss in Mother 3. It is a near-invincible statue with the likeness of Porky Minch.

The statue has 100,000,000 hit points (more than any other boss in the game), but using the New Year's Eve Bomb reduces this amount to 1, making it possible for Lucas and co. to defeat the King Statue in one hit. PSI Flash can also be used against the statue, but this technique is often ineffective during the battle. It gives more wealth than any other boss in the game.

The inscription of the statue is "The smartest, bravest, and toughest chubster of all time. Here stands a statue of our great leader, Master Porky." After defeating the King Statue, the man standing near the statue's pedestal will give Lucas and friends the Trivia Card 4 if he is talked to. The King Statue can only be fought after Boney is found in New Pork City's sewers and rejoins Lucas's party. After that, interacting thrice with the statue makes it come down off its pedestal and attack.

It is heavily implied that the King Statue is a satire of the real-life Statue of Liberty; not only do their respective locations differ by only a letter (New Pork City and New York City, respectively), but both stand on pedestals, wear a crown, and carry an item with great symbolism in each hand. 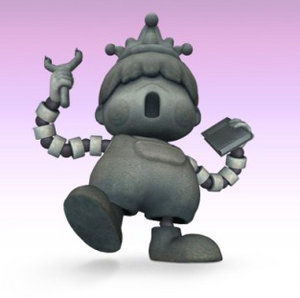 The King Statue as it appears in Super Smash Bros. Brawl.