King Taijitu are large, serpentine creatures of Grimm. They appear as antagonists in RWBY and its manga adaptation.

The King Taijitu is one of the larger enemies seen in RWBY, easily dwarfing individuals like Ren. Where normal snakes have a pair of large fangs in their mouths, the Taijitu sports many fangs in its jaws, with a long, black forked tongue to boot. It has two halves, a black one and a white one, that are joined in the center.

The black half is primarily black in color, though it does contain a few speckles of white on its underbelly, as well as some isolated areas along its body. Its color scheme is very similar to that of the Beowolves and Ursai that have also been encountered in the Emerald Forest. It has large, blood-red eyes and a white bony covering with red markings on the top of its head.

The white half is essentially the inverse of the black half. It also has large blood red eyes; however, the bony covering on the top of its head is primarily deep gray with red markings. Also, toward the end of its body, its scales appear to have a checkerboard design of gray and white, before turning black and white, then turning completely black as the other half's design comes into play.

Like all Grimm, King Taijitu were created by the God of Darkness to offset the God of Light's creations of life and beauty.

In "The Emerald Forest", during the Beacon Academy Initiation, Ren is ambushed by the black half of a King Taijitu. He draws StormFlower, then engages the creature. He has the upper hand and manages to wound his opponent, but then the white half joins the fray.

The white half disarms Ren, but he soon gets back up. Ren uses his Aura to defend against the black portion's attack. He then rips out both of the creature's fangs, uses one to impale the King Taijitu in the eye, then delivers a palm thrust to destroy its head in one swift blow. He then engages and defeats the white half off-screen.

In the manga set between Volumes 1 and 2, Team JNPR is performing a Grimm extermination mission, and battling against four King Taijitu. Jaune notices a mysterious Tentacle Grimm briefly, but is distracted by the King Taijitu attacking. Suddenly, all of the King Taijitu merge together, creating an eight-headed amalgam Grimm. The team struggles to fight the new creature, with Team RWBY arriving to help them. As they battle the Grimm with little damage dealt, Jaune tells Ruby about the Tentacle Grimm he saw and how he believes it has something to do with the Grimm's new abilities. Ruby observes closely, and notices the Tentacle Grimm's eyes glowing that the center of the Grimm monster.

Now knowing the nature of the creature they are fighting, Weiss remarks that it is a possession-type Grimm that took control of the other Grimmm, and is similar in nature to the Giant Armor she fought a few months before in that it is an amalgam possession Grimm. Jaune then prompts his team to hold off the King Taijitu as Blake prompts her team to attack the Tentacle Grimm in the center.

In "No Brakes", a King Taijitu was seen falling through the hole created by the blast from an exploding train. It followed the train along with the other Grimm, eventually reaching Vale to wreak havoc among its citizens.

In "Breach", a very large King Taijitu emerges from the hole caused by the explosion and attacks Team RWBY. Shortly thereafter, Nora Valkyrie arrives and swiftly kills it with Magnhild.

King Taijitu appear as units in RWBY: Amity Arena; when deployed, they move quickly and can strike at both ground and air units. When they encounter an enemy unit, they will wrap it in their coils and squeeze, causing massive damage until the unit is killed. Meanwhile, the other head will defend the constricting side. 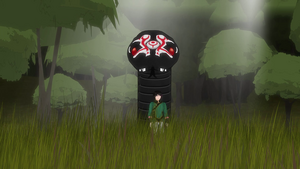 A King Taijitu appearing behind Ren. 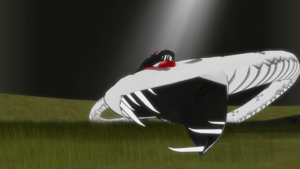 A King Taijitu using its white half. 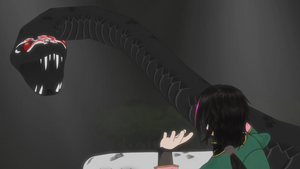 Ren attacked by a King Taijitu. 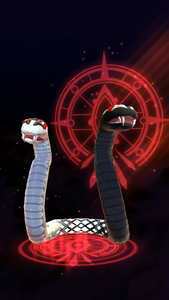