King of the Kobolds

Commander of the League of E.V.I.L.

Hoard and protect his treasures

King Togwaggle is a recurring antagonist in the Warcraft spinoff Hearthstone: Heroes of Warcraft. He first appeared in Kobolds & Catacombs as the central antagonist, where he is the leader of many of the dungeon bosses who attack the adventurers. Togwaggle later joined forces with the Arch-Thief Rafaam in the story arc of the Year of the Dragon, teaming up with the other Hearthstone: Heroes of Warcraft villains as one of the leading members of the League of E.V.I.L..

As the king of all kobolds in Azeroth, Togwaggle is described as "the big cheese, the head rat, the be-candled King of the Kobolds", who marks his superiority over other kobolds with his rotund stature, a "regal shovel", and a lantern crown (as opposed to a standard kobold candle). From this, it can be gathered that Togwaggle is a rather greedy and gluttonous king, with a lot of arrogance because he believes his possessions make him better than everyone else. Similar to Rafaam, he likes to steal the other player's deck, and holds the deck for a ransom in his collectible card.

Togwaggle is very mischievous, causing trouble for adventurers in hopes of stealing their treasure. He is easily frustrated when adventurers evade his traps, and even more so when they defeat the monsters he sends after them (though it is evident that Togwaggle doesn't control all the monsters in the dungeon). When the player is defeated, he becomes giddy at all the loot (or "shinies") they dropped, but when he is defeated, he is shocked that they made it out of the catacombs with all his treasure.

While he is intelligent by kobold standards, among the members of the League of E.V.I.L., Togwaggle gets the rank of Heistbaron and is easily the dumbest of the group, coming up with simplistic plans based on the short-term goal of satisfying his own greed. Like most kobolds, he speaks with broken grammar and has a weird obsession with candles, but recognizes powerful treasure when he sees it. His collectible card in Rise of Shadows is in the Rogue class has him adopt the title of Heistbaron, where he breaks into Dalaran's banks with a Lackey to choose one of the Fantastic Treasures.

King Togwaggle appears as the main antagonist of the Dungeon Run game mode, taunting the player at every turn in hopes that they will lose and he can take all their collected treasures. Sometimes, Togwaggle will appear as the end boss of the dungeon, and is considered one of the most difficult bosses of the game mode. When in battle, Togwaggle's Hero Power has his pet fire spirit, Rakanishu, give him a treasure for just 3 mana, which gives him random powerful effects. When beaten, Togwaggle expressed dismay that his "kobold treasures" have been taken by the adventurers.

Togwaggle is the first villain summoned by Madame Lazul, who had been tasked with gathering a team of villains at the request of Rafaam. When the other Hearthstone: Heroes of Warcraft villains are gathered, Rafaam welcomes them into the League of E.V.I.L., an offer Togwaggle eagerly accepts in hopes of refilling his inventory of treasure.

In the first chapter of The Dalaran Heist, Togwaggle leads the attack on the Dalaran Bank vaults. Togwaggle entrusts the task of distracting the guards to his pet fire spirit, Rakanishu, who represents the Mage class. At the end of the chapter, Togwaggle expresses joy at the amount of loot, stating that there is more gold than he saw even in the catacombs.

While sneaking through Madame Lazul's cards, Togwaggle is surprised to see a premonition that the League of Explorers, Rafaam's old enemies, are coming to stop the League of E.V.I.L. As a result, Rafaam takes the now-stolen Dalaran to Uldum and unleashes the ancient Plague Lords to fight them. While Togwaggle does not play a major role in this expansion, he and his fellow villains are still at large.

In Galakrond's Awakening, Togwaggle rides a wax dragon and becomes Waxrider Togwaggle, who is either a playable Rogue hero or a boss encounter, depending on if the player sides with the heroes or villains.

In the Explorers campaign, Togwaggle holds Reno Jackson prisoner in the Violet Hold of Dalaran, and is fought by Commander Elise. His Hero Power summons Living Candles, which turn into Wax Lances when they die. Eventually, Togwaggle is defeated by Elise and Reno is freed to fight Rafaam and Galakrond. Alternatively, in the E.V.I.L. campaign, Rafaam sends Togwaggle to learn the secrets of dragon magic, and fights Dragoncaster Askaara to coerce her into telling him. 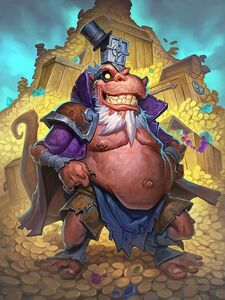 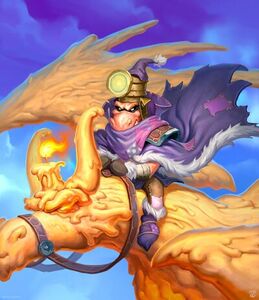 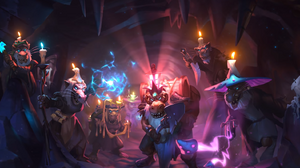 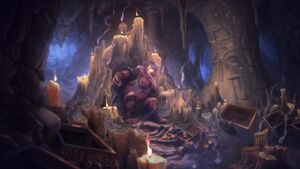 Togwaggle lamenting over his lost treasure. 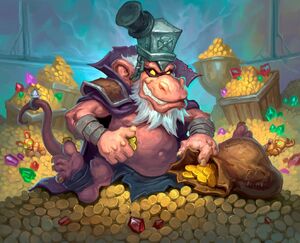 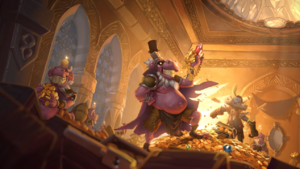 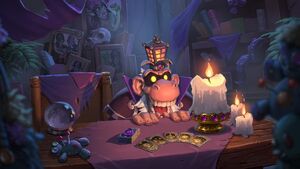 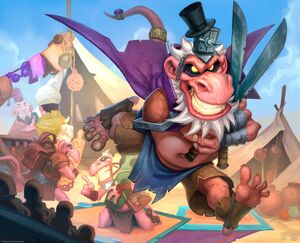