Acquire the sword of Caesar.

King Vortgyn is the main antagonist of the 2007 live-action historical film The Last Legion. He is the king of the barbarians who wants to rule all of Europe, including the Eastern Empire, notably Rome and Britain.

He was portrayed by Harry Van Gorkum.

He lead the barbarians to usurp all of Europe, however, he couldn't take over Rome easily. Plotting with Lord Nestor to take over Rome as well, he needed to kill Romulus, and manipulate his protectors. He has sent Odoacer to imprison Romulus, however, Commander Aurelius has rescued him from the prison, managed by the barbarian general Wulfia. After Wulfia failed, he figured out that Aurelius is foiling his plans, leaving him to kill him and his mentor Merlin by himself, and imprisoning Romulus again, thus executing him with Wulfia's help.

He then killed the family of a little girl living in Britain, and attacked Britain with Wulfia and all the other barbarian men. After a long battle, he was killed by Merlin in a duel. Merlin took off his mask, and pushed him into the fire, thus he is believed now to burn in hell.

King Vortgyn is evil, ruthless, vicious, sadistic and egotistical, as all he wants is power and control on kingdoms. He is seen to spark his hatred on Merlin, possibly having some history with him, and having on his necklace the same sword Merlin had on his neck. He cares about nothing but himself, and would harm as much as possible. 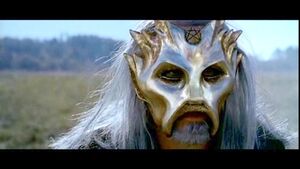 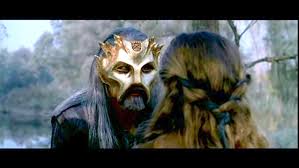 Vortgyn demands that Merlin be given to him 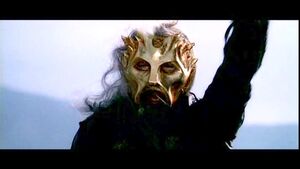 Fighting Merlin
Add a photo to this gallery

Retrieved from "https://villains.fandom.com/wiki/King_Vortgyn?oldid=3705286"
Community content is available under CC-BY-SA unless otherwise noted.