King Arthur: Legend of the Sword

The Tyrannical Ruler of Camelot

Kill Arthur and those who stood in his path to prevent him from becoming the king and maintaining his reign over Camelot.

Acquiring Excalibur so he can expand his rule to entire world (all failed).

King Vortigern (or simply Vortigern) is the main antagonist of the 2017 fantasy/action-adventure film King Arthur: The Legend of the Sword. He is Arthur's uncle and brother of Uther, who is also a powerful warlock and tyrannical ruler of Camelot. He seeks the mighty Excalibur so he can rule the world and enslave humanity.

He was portrayed by Jude Law, who also portrayed Harlen Maguire in Road to Perdition and Yon-Rogg in the Marvel Cinematic Universe film Captain Marvel, and voiced Pitch Black in Rise of the Guardians.

Jealous of his brother Uther's reign over Camelot, Vortigern conspired with the powerful warlock Mordred to have him kill Uther during his invasion against Camelot to establish the mages' reign over humanity. But Uther, with aid of his mighty sword Excalibur, managed to destroy Mordred's forces by infiltrating his lair and beheading him, leaving his army in disarray and saved Camelot.

Intrigued by the sword's powers, Vortigern then sacrificed his wife, Elsa, to sea witches in exchange for dark powers as part of preparation of his coup against Uther. When the coup commenced, he had a demonic knight kill Uther's wife before confronting the king. Uther, upon realizing that Vortigern was also after Excalibur, took a drastic measure to prevent his treacherous brother from claiming it: He sealed the sword with a powerful magic in a stone where only his son could unlock it. At the same time, Uther's son was smuggled out of the kingdom in a boat that led to Londinium, where he was found and raised by a group of prostitutes who adopted him and named him Arthur.

As Vortigern instigated genocide against other sorcerers to ensure no one could rival his power, he knew the real threat of his reign was actually Uther's son who currently lived as a commoner and prostitutes' adoptive son. So, he sent his Blacklegs to force young men they can find to try and pull Excalibur from the surrounding stone Uther used to seal it, but none of them were able to pull it out. During this moment, Arthur grows into a skilled fighter and man of the streets, alongside his friends Tristan and Backlack whilst remained oblivious to his birthright.

Eventually, the day where a series of events that led Vortigern to learn the true threat of reign has arrived: The tyrant heard the news where his Viking guests were attacked by Arthur, Tristan, and Backlack for harassing one of prostitutes who adopted Arthur and forced them to pay her a year's wages as punishment. This prompted Vortigern to send his Blacklegs soldiers to invade the brothel to hunt those responsible. Arthur tries to escape the city, but is caught and put on a ship with hundreds of other men. That's the moment where Arthur learned Excalibur's existence and Vortigern's attempt to find Uther's missing son by kidnapping many young man and have them pull it from the stone Uther used to seal it. When it's finally Arthur's turn, he succesfully pulled the sword out, only to quickly faint from the vast power it contains.

Now convinced that Arthur is Uther's missing son, Vortigern visited the young man and revealed his true lineage. Since Arthur has outlived his usefulness, Vortigern had him executed. However, the mage Guinevere, alongside Sir Bedivere, foiled the execution where Guinevere uses her magic to stage a diversion while at the same time, Percival and Rubio, two of Bedivere's men, rescue Arthur. Taken to his hideout, Arthur initially refuses to help them, but soon collapses again when he tries to wield the sword. Suspecting that he lacks the willpower to control it, Guinevere persuades Bedivere to take Arthur to the "Blacklands", the realm where, years earlier, Merlin destroyed Mordred's tower in defiance of his darkness. That's the moment where they learned Vortigern's past involvent with Mordred's invasion against Uther out of his jealousy against his brother. Arthur, having restored the sword's magic, returns determined to destroy Vortigen for his crimes.

Aware that his maid is a spy for Bedivere and at the same time, he learned a series of rebellion instigated by Arthur, Vortigen decided to counteract this by announces plans to meet with his barons in Londonium, sending a body double in his place to oversee the battle. The rebels quickly realize the deception, but attack anyway which was all part of his plan. The plan against the rebel went smoothly in spite of some of his men, who led by their commander Mischief John, got killed in process. Mischief John and his squadron of Blacklegs Rubio and injured Backlack and interrogated them for information. Though Backlack's son Blue interfered to save his father with Arthur aiding him, Backlack was killed, and as Arthur left demoralized with his friends' death, Vortigern and John gained enough info of rebels's whereabouts and killed them all except Bedivere, George, and Percival who comfort Arthur and captured Blue and Guinevere. John then showed up and delivers a message from the king: If Arthur does not surrender himself by nightfall, both Guinevere and Blue will die. Bedivere is able to get the former released in exchange for Arthur surrendering both himself and the sword.

Just as Vortigern is about to kill his nephew, a giant snake controlled by Guinevere attacks and devours John and his men, while the others free Vortigern's prisoners and lead them in a revolt against the Blacklegs. A desperate Vortigern remorsefully sacrifices his only daughter for more power and is transformed into the demon knight, confronting Arthur in a separate dimension. Despite his fighting skill, Arthur is quickly beaten by his superior power. Just as he is about to submit, he witnesses a flashback of the moment when his father was struck down: The stone Uther used to seal the sword is not an ordinary stone he enchanted to seal the sword, but rather his own transmogrified body — Uther sacrificed his life to protect the sword by used its powers to seal it on his body. The process caused his body transmogrified into large stone that locked the sword with only his son can remove it. Arthur snatches the sword before it impales Uther, who gives him the right to wield it. Now the true master of Excalibur, Arthur then thanks Vortigern for starting a chain of events, which made him the man he is today. He then engages Vortigern in combat with full confidence and immense skill, destroying Vortigern's Demonic Scythe, before stabbing him in the abdomen. As a dying Vortigern transforms back into his human form, Arthur blesses him for all Vortigern has done, despite his tiranty, and kisses his hand, just as Vortigern passes away.

Vortigern is portrayed as an extremely tyrannical and megalomaniacal ruler. Though he actually loved his wife Elsa and his daughter to a point, his love for them was ultimately outweighed by his lust for power, and so in the end was willing to sacrifice them, deeming them as necessary sacrifice for maintaining his rule over Camelot. 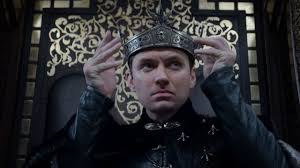 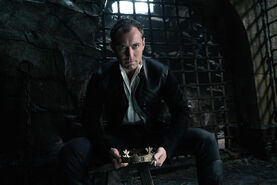 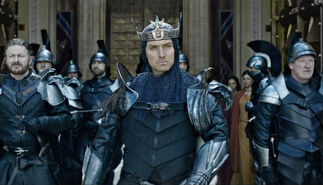 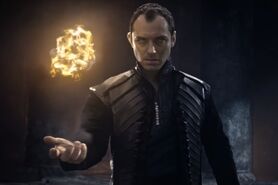 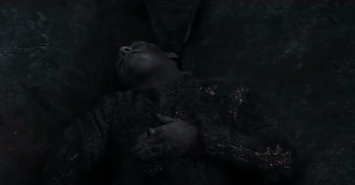 Vortigern Death
Add a photo to this gallery
Retrieved from "https://villains.fandom.com/wiki/King_Vortigern?oldid=3549555"
Community content is available under CC-BY-SA unless otherwise noted.