Your Majesty
Mr. King (by Christopher)
Wartlord the Liar
Your Fatness
Your Multiplex
Your Sweatiness
Kingy (by Buffuno)

King and ruler of his castle

Offense towards his henchmen and others

Laughing at the suffering.
Buying beautiful expensive objects to place around his castle to make him look very rich.
Making himself look like a king with style.
Abusing his henchman.

Use Linda's star to make himself the most powerful king on the planet.
Kill Christopher and his friends (both failed).

King Wartlord, also known as Maledeto in the Portuguese version, is the main antagonist of the 2001 Brazilian animated children's fantasy film The Happy Cricket (also known as O Grilo Feliz in Portuguese). His primary motivation stems from self-entitlement. He is the greedy lizard king and Christopher's arch-nemesis. He also has a mantis henchman named Buffuno, and toads as his guards.

He was voiced by the late Araken Saldanha in Portuguese and the late Bob Papenbrook in English.

Wartlord is a greedy monitor lizard who rules over the forests surrounding his castle. Because of the stature which he believes that he has, he insists that he gets the best of everything: the best food, possessions, castle, and anything else that he certainly feels that he is obligated to. His personality comes off as evil for the sake of being completely evil. Typically, he hates positive things like beauty and music in general, but he loves ugliness, the suffering of others, and beautiful expensive objects, such as the bright star in his respective film, which he believes that it is really a magnificent diamond. With this diamond, he concludes that he will be able to create a great golden statue that would magnify his significant greatness. The irony in this is that he is not only far too lazy to get it or build the statue himself, but apparently the bright diamond will not glow for him. In comparison, the star turns as black and as dead as his heart whenever he touches it.

Even though he is considerably smarter than his henchman Buffuno, he is still very ignorant and unknowledgeable. When Buffuno informs him that the diamond is really a star, he rejects the idea and still believes that this one star will just bring him glory, fortune, power, honor, and fame, despite the fact that it refuses to give him any of these things.

Because of Christopher's strong bond with music and the Night Star named Linda, he is determined to destroy him when Christopher the Happy Cricket finally approaches his castle to reclaim the star. When Christopher plays his guitar, the star glows so brightly that Wartlord is blinded and forced to back away far enough to fall over the edge of his castle. Christopher and his companionable friends try to help Wartlord, but his slimy tail prevents them from getting a good grip, causing Wartlord to fall into a fire sparked from a thunderbolt and is burnt to death.

Wartlord is a selfish and greedy tyrant who declares himself king over the forests surrounding his castle. He is an egotistical reptile who likes to laugh at the suffering. Despite his heartless nature, he is shown to be extremely extravagant, having bought a superabundant amount of beautiful expensive objects to place around his castle to make himself look very rich.

He is also shown to be abusive towards Buffuno and his guards. He also has a fondness for making himself look like a king with style. He is also shown to be an avaricious and materialistic tyrant, stealing Linda's star and use it to make himself look powerful. One of his most diabolical plans is when he sends his guards to capture Christopher and his friends, although he fails to do so. 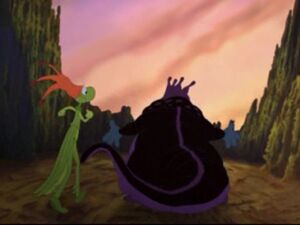 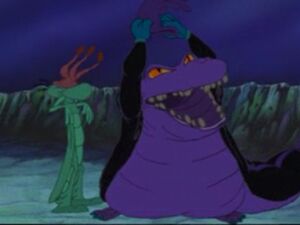 Wartlord putting his crown back on. 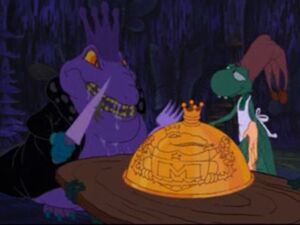 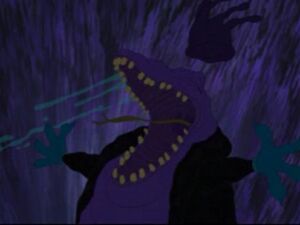 Wartlord yelling at the toads to shut up. 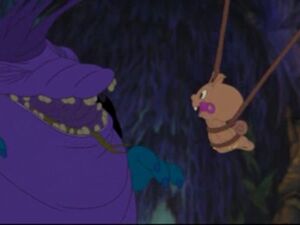 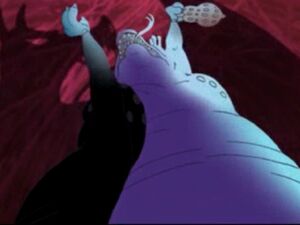 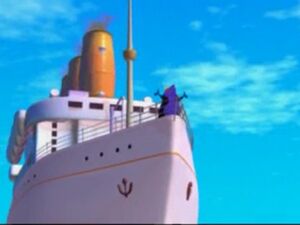 Wartlord on his ship during the villain song My King Sticks with Me. 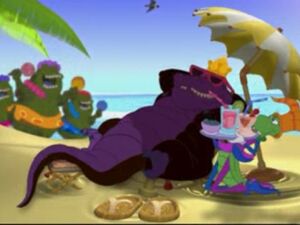 Wartlord in Hawaii during the villain song My King Sticks with Me. 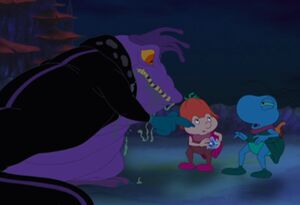 Wartlord demanding Christopher and Leonardo to give him the star back. 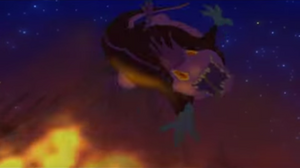 Wartlord falling to his infernal demise. 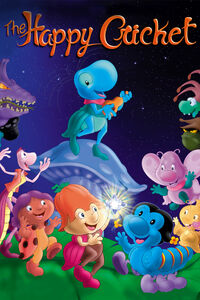