The King Worm, additionally called X-56V and Diorumu, is the first boss Samus Aran faces in her mission through planet Zebes in Metroid: Zero Mission.

After finding and gathering her missiles in Corridor No. 5 in Brinstar, Samus encounters and fights the King Worm, its main weakness being the missiles stuffed in Samus's arm cannon. It attacks by rushing its head at her, forcing her to shape into a Morph Ball to avoid it. It also shakes spikes off of its body segments. Shooting it in the eye when it opens its eyelid three times is enough to destroy the King Worm. Defeating it makes it drop the Charge Beam.

If Samus is unable to kill the King Worm in its first encounter, it will dig through the ground and appear at Corridor No. 4 later in Brinstar. It will alter between the two corridors until Samus defeats it.

In Chapter 15 of Volume 2 of the Metroid manga, during Samus' navigation through Zebes, the King Worm attacks her by raming her against a wall. An Imago joins in and holds Samus in place as the King Worm attacks her with its pitchers. Before it can attack again, Samus learns its attack patterns and blasts its eye and one of its pitchers off. Samus then tricks the disoriented King Worm to kill the Imago by impaling it with its remaining pitcher before finishing it off. 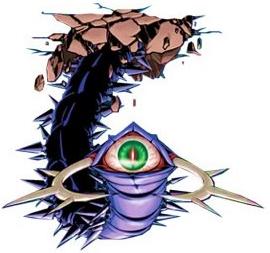