The King of Cats is a villain in the DC universe and an enemy of Batman. Having appeared only once, The King of Cats is the brother of Catwoman, who tries to get into her line of "work" as a thief and also showed incestuous interest in his own sister.

In his one and only appearance, the King of Cats tried to get his then-reformed sister to go back to her villainous ways so that they could become partners in crime. Throughout most of the issue, Batman and Robin were unaware that the King of Cats and the former Catwoman are brother and sister.

leading them to believe that he was a would-be-lover (this may have been true, though not in the way Batman and Robin imagined). Meanwhile, Catwoman was reluctant to turn him in because he was her brother, which made Batman think that she was falling in love with the King of Cats (still unaware the two were related).

In the end, Catwoman managed to convince her brother to stop his antics and he even promised to "take his medicine," as for Batman and Robin, they become more than a little surprised when Catwoman finally reveals the King of Cats was her brother all along. 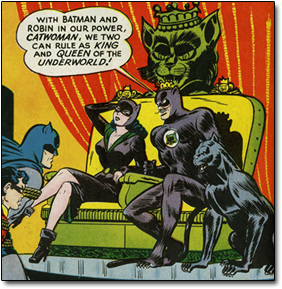 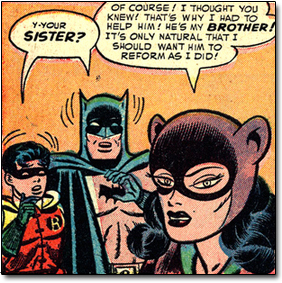 Add a photo to this gallery
Retrieved from "https://villains.fandom.com/wiki/King_of_Cats?oldid=2798658"
Community content is available under CC-BY-SA unless otherwise noted.