The King of Midland

Authority and command as a king

Keep Charlotte all to himself.

The King of Midland is the main antagonist of the Golden Age Arc of the Berserk series.

He was Midland's king and Charlotte's father. He appeared as a trusting supporter to Band of the Hawk until the second half of the Golden Age Arc, in which he becomes the main antagonist and threatens the Band of the Hawk's survival. He was initially portrayed as a benevolent king who looked after his kingdom and his people, but under crushing stress due to tremendous responsibility as a king bearing down on him, he was later revealed to possess a tyrannical and perverted side, which he repressed for years until Griffith's affair with Charlotte broke him and fully transformed him into obsessed tyrant.

He is voiced by Nobuyuki Katsube in the Japanese version, and by Christopher Corey Smith in the English version.

The elderly ruler of Midland, who had been fighting a century long war with the neighboring kingdom of Chuder.

Burdened by the demands and responsibilities of his throne, the King's only comfort was his daughter Charlotte, whom. to him. was the sole source of warmth in his existence. Due to the Band of the Hawk's victories on the battlefield, the King supported Griffith despite his common heritage and the disapproval of the nobility and eventually bestowed upon him command over all of Midland's armies.

However, after Griffith slept with Charlotte, the king became utterly distraught and ordered that Griffith be imprisoned. He also ordered an attack on the leaderless Band of the Hawk, resulting in the Band's numbers being drastically reduced over the following two years. Driven to the brink of insanity by the fear of losing his only comfort, the king then proceeded to sexually assault Charlotte, who barely managed to fight him off. Afterwards, the guilt over what he had nearly done caused the King's health to slowly degrade to the point that his hair turned white and his body wasted away to skin and bones.

When Griffith was rescued a year later by Guts and the surviving members of the Hawks, the king sent a group of five Bākiraka, and then the Black Dog Knights led by Wyald to kill Griffith.

Shortly before Griffith was reincarnated on Earth, the King's health had further faded to the point that he was unable to leave his bed anymore. In his final moments, he demanded to see his daughter, but Charlotte no longer recognized him as her father and refused to see him. Before he died, the King had a final vision of Griffith being reunited with Charlotte, whereupon he realized the real reason he had supported Griffith was his hope that Griffith would take his place and free him from the cold loneliness of the throne. 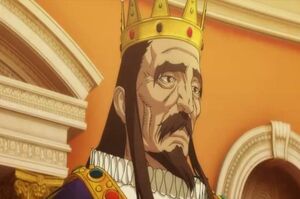 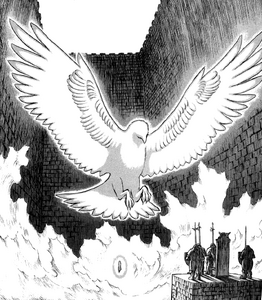 Moments before the King's passing.
Add a photo to this gallery

Retrieved from "https://villains.fandom.com/wiki/King_of_Midland?oldid=4077782"
Community content is available under CC-BY-SA unless otherwise noted.