The King of Spiritual Touch

Usurper and ruler of the Heaven Reaching River (formerly)

Eat children of the village near the Heaven Reaching River (succeeded until Wukong's arrival).

The King of Spiritual Touch (in Chinese: 靈感大王) is an antagonist in the 16th-century Chinese classic novel Journey to the West by the late Wu Cheng'en, and its multiple adaptations. He is a goldfish from the Bodhisattva Guanyin's lotus pond at Mount Putuo, but then became a demon based in Heaven Reaching River (in Chinese: 通天河).

In the 1986 classic adaptation series, he was portrayed by Wang Limin.

The King of Spiritual Touch's appearance is that of a humanoid creature who has eyes that are as light as the shooting stars, sharp teeth, red face similar to that of a fish. He wears golden armor and helmet, though the 1986 TV series depicts him with bare head and apparently has no helmet. The novel describes him as "looks like a Curtain-Lifting General", Sha Wujing's previous title on Heaven, meaning that they might at least have some resemblance. His true form is that of a regular goldfish.

The King of Spiritual Touch is a sadist, who enjoys mentally torturing the villagers, and eating children. However, he's also a man of his word, keeps his promise with his female assistant of becoming her brother-in-arm (or her husband, in the 1986 series) once they successfully captured Xuanzang following her plan.

The King of Spiritual Touch is originally a goldfish lives in the Bodhisattva Guanyin's lotus pond, listened to her reciting the scriptures every day, and then learned to achieve a humanoid form. He also turned a lotus flower that is yet blooming in the lake into his weapon, a Nine Petals Bronze Hammer (in Chinese: 九瓣銅錘), and then swam followed the tide to the Heaven Reaching River, took over the Great White Turtle's home, and terrorized the people living near the river, demands that they sacrifice a boy and a girl to him every year or he will cause flooding.

The King of Spiritual Touch first appeared when he was going to eat one boy and one girl like he did every year. However, the two kids turned out to be Sun Wukong and Zhu Bajie in disguise to save the real kids. He was no match for Sun Wukong and was forced to retreat back to his underwater lair. However, a female assistant of him revealed that eating Xuanzang, Wukong and Bajie's master, would grant him immortality. Listened to her, the demon king quickly used a trick of freezing the facade of the river to capture Xuanzang.

He next appeared when Wukong, Bajie and Sha Wujing, knew about his plot to capture their master, and fought them. However, he was no match for them and had to retreat back into his cave once again. He closed the cave's gate, filled it with rocks following his female assistant's words again, make Zhu Bajie and Sha Wujing unable to find the demon king nor Xuanzang. Because of this, Wukong then resorted to the help from the Bodhisattva Guanyin, who used a fish basket to trap the demon, forced him to revert back into his true form of a goldfish, and brought him back to the pond.

Much later, when Xuanzang's party had successfully received the sutras and returned to the village, the villagers mentioned that the King of Spiritual Touch's temple had been destroyed and replaced with a new temple about Xuanzang's group, which turned out to give them even better weather than the demon king ever did. 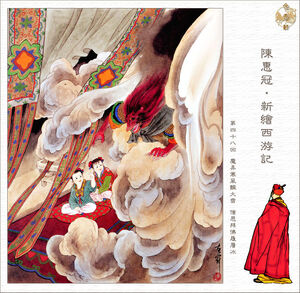 The King of Spiritual Touch arrives in the novel. 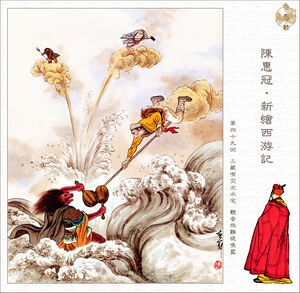 The King of Spiritual Touch fighting Sun Wukong, Zhu Bajie and Sha Wujing in the novel.
Add a photo to this gallery

Retrieved from "https://villains.fandom.com/wiki/King_of_Spiritual_Touch?oldid=3549547"
Community content is available under CC-BY-SA unless otherwise noted.