The King of Toys

The King of Toys is an Emblem Heartless that appears in Kingdom Hearts III as the boss of the world Toy Box. It was created by Young Xehanort out of the darkness in Buzz Lightyear's heart to stall him, Woody, Sora, Donald, and Goofy from preventing his escape.

After Young Xehanort abducts Buzz, Sora, Donald, Goofy, and Woody follow him through a dark corridor. Inside, Young Xehanort threatens to kill Buzz to stop the gang from attacking him, but Woody is able to save him by using his pullstring as a makeshift grappling hook. Cornered, Young Xehanort uses the darkness he extracted from Buzz's heart to create the King of Toys to keep the gang occupied while he makes his escape.

The Heartless could attack the gang by shooting missiles, generating bolts of electricity, charging at them, and creating a massive tornado to blow them away, but in the end, they were able to destroy it. 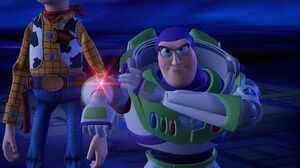