Villains Wiki
Register
Don't have an account?
Sign In
Advertisement
in: Tom and Jerry Villains, Anthropomorphic, Monarchs,
and 21 more

Ruling over the cats.
Playing with keys.

Capture the toys and keep them imprisoned as his slaves.

Stop Jerry from reclaiming the kingdom.
Rule over the toy kingdom forever (all failed).

The King of the Cats is the main antagonist of the 2007 direct-to-DVD film Tom and Jerry: A Nutcracker Tale. He is the tyrannical ruler of the cats, and the one who leads them in imprisoning the toys and taking over their kingdom and the winter wonderland. He fills the role of the Mouse King in the original ballet.

He was voiced by Garry Chalk, who also played Doctor Robotnik in Sonic Underground.

The King of the Cats is first introduced when he takes part in a song about himself sung by his subjects, causing the sofa he was sitting on to fall and crush them, though the King pays them no mind. The other cats soon go back to singing the song with him, though they are all covered in snow when a truck goes by and blows it on them.

Later, Tom noticed that magic was bringing toys to life in the theater and beckoned for the other cats to go see. The King of the Cats and his men all went inside the theater and were transformed by the magic as well, with the King being turned into an actual king while his subjects were turned into soldiers. The King and his Guards soon began rounding up all the toys and locking them in a cage, as well as putting Jerry, Paulie Pixie and Nelly into a can and firing them out of a cannon.

Having claimed the wintry wonderland created by the magic for himself, the King sits on his throne at his castle and summons his Prime Minister, Lackey, to tell him about the state of his kingdom. Lackey tries to raise his concerns about how the King is treating the toys and forcing them to work, but the King ignores him.

The King then goes over to La Petite Ballerina, whom he had captured and put in a cage, and tells her to dance. She refuses so the King plays a banjo in an attempt to get her dancing, but the ballerina continues to refuse. She then tells the King that he ruined everything, but the King says everybody "seems happy to me", only for one of the toys the King was forced to clean his floors to start crying. However, the King ignores this and gloats to the ballerina that there's nothing anyone can do about him and his rule. The ballerina then brings up Jerry, but the King laughs in her face, not considering him a threat.

However, the King later decides that it would be a good idea to finish off Jerry just to be on the safe side and orders the Captain of his guards, Tom (who the King mistakenly calls "Tim"), to take all the men he needs to go after Jerry to make sure he doesn't come back. Captain Tom then rounds up the Cat Guards and leads them to pursue Jerry. Meanwhile, Tuffy sneaks into the castle and gives La Petite Ballerina a set of keys to free herself from her cage. The King soon takes notice and takes the keys and starts playing with them. Lackey then comes along and, thinking the ballerina was trying to distract the King from his duties, takes the keys away, though the ballerina managed to hide the one she needs to free herself behind her.

The ballerina eventually makes her escape while the King of the Cats is sleeping. The King is woken up by Lackey and, realizing that the ballerina has escaped, begins searching for her. To make matters worse for the King of the Cats, Tom returns to inform the King that Jerry is coming to take back the kingdom with an army of toy soldiers given to him by the Toy Maker. Shoving Lackey in front of him, the King of the Cats tells him to do something, to which Lackey turns to Tom and tells him to do something. Tom then rounds up all his men to fend off the soldiers, but they are soon pushed back by the soldiers' sheer numbers.

The King and Lackey retreat back to the castle, but discover that La Petite Ballerina has freed the other toys and taken over the castle. As his guards are overwhelmed by the toy soldiers, the King of the Cats shouts at them all to retreat. However, Jerry gets into a toy train to pursue them and steers the train before leaping out of it so it knocks all of the cats, including the Cat King, out of the theater and into a garbage bin just outside it, which promptly closes with them inside. 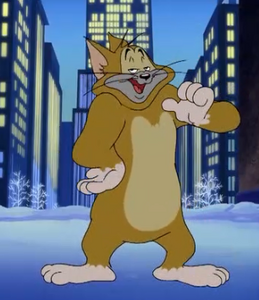 The King of the Cats before he was transformed by the magic. 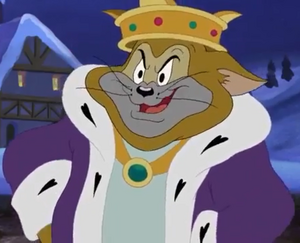 The King of the Cats commanding his guards to capture the toys.