King of the Southern Hill

Ruler of the Hidden Misty Mountain

Have the Woodcutter's wife to marry him (1986 TV series; failed).

The King of the Southern Hill (in Chinese: 南山大王) is an antagonist of the 16th-century Chinese classic novel Journey to the West by the late Wu Cheng'en, and its multiple adaptations. He is a demon king based in Linked Cave (in Chinese: 連環洞), Bent Peak (in Chinese: 折岳), Hidden Misty Mountain (in Chinese: 隱霧山). He is less powerful than other demons in the story, but is considered one of the wittiest.

In the classic 1986 adaptation series, he was portrayed by Wu Zhiyong.

The King of the Southern Hill is an anthropomorphic leopard with clothes made of skin. In the 1986 series, he also wears a yellow skinned robe. His true form is that of a leopard with mugwort-shaped patterns on its body. According to Sun Wukong, this type of leopard can eat even tigers.

As a typical Journey to the West demon, the King of the Southern Hill is a very sadistic tyrant who enjoys capturing and eating humans. He is also considered to be one of the smartest demons in the story despite being one of the weaker ones, as he followed his main pioneer's words to manipulate Sun Wukong, Zhu Bajie and Sha Wujing into believing that their master, Xuanzang, is dead. However, he's still an honorable person who is willing to keep his words to promote the junior demon who gave him the plan to capture Xuanzang to be his head pioneer, and he is shocked and saddened upon learning that the pioneer is killed by Zhu Bajie.

In the 1986 series, he captured the Woodcutter not only to eat him, but also to force his wife (who he started to have interest with ever since hearing her singing, and also being captured by him along with her husband as well) to marry him, and apparently even tried to rape her at one point, thus making him a rapist. Regardless, he still retains the traits that he had in the original novel.

When Zhu Bajie was tricked by Sun Wukong to go to meet the demons in the Hidden Misty Mountain (believing that there's a village that wants to invite the monks), he was almost being captured by the King of the Southern Hill and his minions. However, the two fought, and while things seemed to be bad for Bajie at first, Wukong eventually showed up and helped him, thus Bajie won the battle. When returned in his cave in disappointment, the demon king was told by a junior demon (a demonic wolf) to use a plan called the "strategy of separating the plum blossom's petals" (in Chinese: 分瓣梅花计) to lure Sun Wukong, Zhu Bajie and Sha Wujing away from their master, Xuanzang away in three different instances and then capture Xuanzang, as eating the monk would grant one immortality or extended lifespan. As a result, the king promoted the junior demon to be his head pioneer as a method of giving credit for the latter for giving him such a good plan to capture Xuanzang.

When Wukong, Bajie and Wujing came to his cave's gate to ask for Xuanzang back, the King of the Southern Hill, once again following his pioneer's words, lied that they ate him already, and transformed part of a wipping willow into fake a Xuanzang's head, but Wukong managed to deduce that this is a fake one. Thus, the king gave them a real head from a previous victim that they hadn't yet to eat, caused all three of Xuanzang's student to believe that their master is dead.

Wanting revenge for their master, Wukong and Bajie came to the King of the Southern Hill's cave (after having buried the head) and fought him, with Bajie managed to kill the head pioneer. Wukong then used his shapeshifting abilities to sneak into the cave and happy to discover that Xuanzang is still alive. They, along with the Woodcutter that the demon captured a day earlier than Xuanzang, managed to escape the cave, with Sun Wukong casted a sleeping spell on the demon and his minions. Zhu Bajie then burned down his cave. King of the Southern Hill was then slain by Bajie just as he awakes, revealed his true form.

The 1986 TV series follows a similar format like in the novel, but it was added that he captured the Woodcutter not only to eat him, but also to force his wife, who the demon king started to have interest with ever since hearing her singing, to marry him. In the original novel, the wife never appeared, and it is apparently even implied that the Woodcutter doesn't have a wife, as he said that if he was eaten, then no one would take care for his elderly mother, implying that he and his mother are the only people who live in his house.

When the fake Xuanzang's head made of part of a wipping willow was exposed to be fake by Wukong, the king didn't give them a real human head, but rather another fake head made of a rock, and just like before, Wukong managed to deduce that it's a fake one, but this time decided not to tell anyone and pretended to be grieved as well in order to trick the demons into believing that they have succeeded. When Wukong was helping Xuanzang to escape (having successfully saved the Woodcutter and his wife earlier), the King of the Southern Hill ordered his minions to fight and capture them, only to learn that the minions were all unable to move due to Wukong had already casted spells on them. Angered, he went out and tried to do things himself, only to get the same fate as his minions, and Wukong revealed his true form to be a leopard. He and his minions were all later killed when Zhu Bajie burned down his cave. 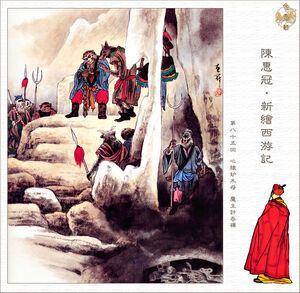 King of the Southern Hill, along with the junior demon (his would-be head pioneer) in the novel. 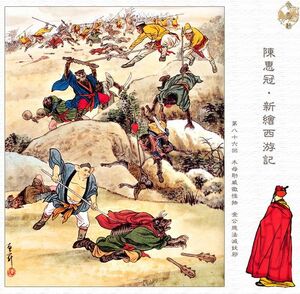 King of the Southern Hill fights Sun Wukong and Zhu Bajie in the novel.

King of the Southern Hill's face.
Add a photo to this gallery

Retrieved from "https://villains.fandom.com/wiki/King_of_the_Southern_Hill?oldid=3549549"
Community content is available under CC-BY-SA unless otherwise noted.