Monarch of the Rat Creatures

Second-in-command of the Hooded One

Incredible strength and skills in wielding his club

Take over the Valley and rule it under the Hooded One (failed).

Kingdok is a major antagonist in the comic book series, Bone. He is the giant leader of the Rat Creatures and the main agent of the Hooded One.

In the games, he was voiced by J.S. Gilbert.

Although he is vicious, scornful (towards humans), temperamental, opprobrious, monstrous, fiendish, and cruel, Kingdok is prone to superstition and easily manipulated by the Hooded One. His development was summed up by himself with him saying that he was once the mighty, notorious, redoubtable, and feared king, but now a slave seeking only death.

As a rat creature, Kingdok possesses red eyes, pale tan hands and feet with claws, and purple fur. Unlike the other he is a bit taller, has two long horns, and have two large bottom teeth stick out, as he was seen in his debut. However, at the end of the series, Kingdok is three times larger and his bottom teeth no longer shows.

His appearance deteriorates over the course of the series:

Not much is known about Kingdok's past except that he fought in the great war, and that he ate Thorn's mother and father.

In the Bone Series

Kingdok makes his first appearance in the first volume Out from Boneville". Kingdok wakes the Two Rat Creatures, who chase Fone Bone while he was lost, to tell them that since Phoney (the one who bears the star) was last seen in their territory, The Hooded One has summoned them to a high council to explain why this happened, and they go. Kingdok is seen at the council with The Hooded One, who sends every rat creature in the valley to attack Gran'ma Ben's Farm.

In Eyes of the Storm, Kingdok locates the Two Stupid Rat Creatures who have been in hiding ever since the fiasco at The Cow Race (which happened in The Great Cow Race). At first, he appears angry with them, but is actually proud, and gives them a sack of rabbits to eat.

Later, Kingdok reports to his master, the Hooded One, and informs her that the girl who lives with Rose Harvestar, "the old cow woman", is the princess. The Hooded One states that she already knows this, and harshly tells Kingdok to leave her so she can speak with The Locust. Kingdok comes, and calls them traitors for spilling their guts. Kingdok then knocks Fone Bone and Thorn out of the way and picks up Gran'ma Ben with his jaws and throws her deeper into the forest. Kingdok follows her and throws her against another tree. He is about to kill her, when all of the sudden, Thorn comes in and cuts Kingdok's right arm off. He lets off a loud scream of pain, and falls over and faints.

A few minutes later, the two Rat Creatures come and freak out because they think Kingdok is dead. They use some leaves to stop his arm from bleeding, and then decide to run away and hide... again. They leave Kingdok and run into the woods. Later, Kingdok recovers and his present when The Hooded One rallies her men to fight. She orders Kingdok to find Thorn and the three Bones and capture. Kingdok wants to confront the Great Red Dragon, but The Hooded One will not allow this and orders Kingdok to his mission.

In Rock Jaw: Master of the Eastern Border, Roque Ja at one point attacks Kingdok and rips out his tongue, which he keeps as a trophy. A possible continuity error is that while Roque Ja is bragging about owning the tongue, Kingdok cannot speak, but later speaks clearly to the Hooded One; after that, he attempts to say "kill you", and it comes out "gill yoo", just as one would speak without a tongue. This may be an effect of the Hooded One's power; while the Hooded One is alive he can speak, but after she is destroyed he cannot.

At the end of the novel, he faces Thorn before she can touch the Crown of Horns. He tells her that "Either she kills him or he kills her", because he wants to die. He states that he is tired of being the Hooded One's puppet. However, Thorn refused to kill him, even though he goads her by reminding her that he was the one who killed her parents (he even tells her that he fed on Thorn's mother while she was still alive). She then tries to dart towards the Crown of Horns, but Kingdok bites her leg. Given no choice, Thorn then drives her sword into Kingdok's head, killing him. 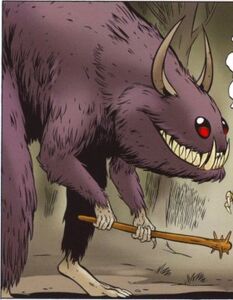 Kingdok's debut in Out from Boneville 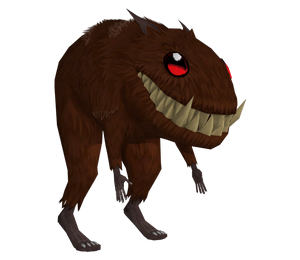 Retrieved from "https://villains.fandom.com/wiki/Kingdok?oldid=3247464"
Community content is available under CC-BY-SA unless otherwise noted.