Kill Spider-Man and maintain power over the New York underworld (all failed).

Wilson Fisk, known better as the Kingpin, is a minor villain in Marvel's Spider-Man. One of the most notorious crime bosses in the Marvel Universe, Kingpin controls most of the organized crime in New York City.

Wilson Fisk uses his power as the Kingpin to maintain order in the Criminal Underworld of New York and even operating the criminal empire akin to that of a corporate business. This in turn greatly mitigates the need for violence and kept civilians out of danger. This in an ironic way, did ensure peace and safety for the citizens and even the law enforcement agents of New York City. Even Spider-Man admitted this as true because after Kingpin's arrest

Despite being the Kingpin of the Underworld, Wilson Fisk also owns a multitude of legitimate businesses which not only earn him a lot of legitimate revenues, but also through which he launders most of his ill gotten revenues.

Wilson Fisk displays inhuman levels of strength and durability. Despite his obese appearance, he has very little fat and is actually pure muscle. He has trained himself to be able to use his exceptional physical stature and even displays superior acrobatic prowess when fighting Spider-Man. He does not get injured form being hit by falling several stories or even having large chunks of concrete thrown at him. Mary Jane mentions that Fisk sliced open Peter with a Katana once, indicating Fisk's swordsmanship. 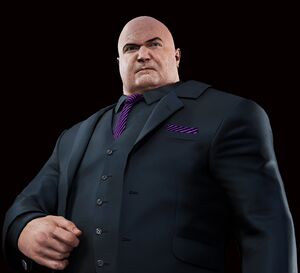 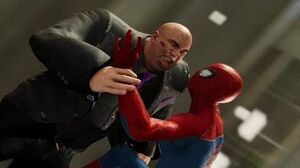 Retrieved from "https://villains.fandom.com/wiki/Kingpin_(Marvel%27s_Spider-Man)?oldid=3512289"
Community content is available under CC-BY-SA unless otherwise noted.