Kill Spider-Man and prevent him from interfering with his operations (failed).

Kill his father to erase his past and for abandoning him in prison as a child (succeeded).

Wilson Fisk (formerly Wilson Moriarty), better known as the Kingpin, is one of the main antagonists of Spider-Man: The Animated Series. He is a powerful and wealthy crime lord of New York City and one of Spider-Man's archenemies. He is also the archenemy of Daredevil, Silvermane, and Black Cat.

He also serves as the founder of the Insidious Six and has many supervillains, such as Doctor Octopus, Mysterio, Rhino, Scorpion, Shocker, and Vulture, work for him. He also had many lieutenants and business partners that work for him, such as his son Richard Fisk, Herbert Landon, Hammerhead, and Mendel Stromm. Some of his former supervillains, lieutenants, and business partners eventually become his enemies, such as Green Goblin/Norman Osborn, Hobgoblin, Chameleon, The Spot/Jonathan Ohnn, Silvia Lopez, and Alistair Smythe. He also had an ex-wife named Vanessa Fisk.

He was voiced by the late Roscoe Lee Browne.

This Kingpin is fairly close to the comics version, but he is often occupied with manipulating superpowered characters to do his bidding. In addition, as opposed to just being a crime lord in New York, the Kingpin has a global criminal organization; his headquarters is simply located in New York (in the Chrysler Building, which he dubs "Crime Central"). His physical abilities are generally depicted the same as his comics counterpart, except in one instance when he toppled a huge robot. His body mass is stated in this continuity as being only "2% fat", a statement followed by the declared possession of "350 pounds of muscle." He is the mastermind behind the creation of the Spider-Slayers and is responsible for the creation of the Insidious Six, the animated equivalent of the Sinister Six.

He is also involved in a power struggle with crime boss Silvermane. Initially, he operated behind the scenes until the "Framed/The Man Without Fear" two-part episode, where his identity was revealed to Spider-Man with the help of Daredevil, who was seeking revenge for his father's murder at the Kingpin's hands. The Kingpin's main associate here was at first Alistair Smythe, but after Smythe nearly betrayed the Kingpin because he believed Kingpin was going to kill him for placing his son in jail during the Daredevil two-parter, Dr. Herbert Landon replaced him. The Kingpin remained at large throughout the series, although an alternate dimension's version was arrested in the series finale. Another alternate version was shown to be the lawyer of that dimension's Peter Parker, though he proved just as underhanded as his counterparts. The Kingpin has proven to be more than a match for Spider-Man, eluding capture and even capturing Spider-Man on occasion. This series also described an origin for the Kingpin as seen in "The Man without Fear", somewhat different than the comic book version. As a boy, Wilson Fisk was influenced by his father, who sought employment as a mob criminal. When older, Fisk assisted his father in robbing banks and jewelry stores, culminating in one robbery where his father escaped but Fisk, hampered by his already-considerable weight, was captured by police. Fisk did not name his father at his trial and was sentenced to prison, where he resolved to survive. In adulthood, Fisk emulated his father's goal and climbed to a position of seniority within the mob, adopting the alias "Kingpin". He destroyed his police file by hacking into the police computer system and erasing it, removing all record of his earlier arrest. He also legally changed his name to Fisk which effectively virtually made his former life "cease to exist as far as anyone else knew". He then exacted revenge against his father, who was implied to have been killed by the Kingpin's henchmen. It was also revealed that his real name was Wilson Moriarty. He maintained a strained relationship with his wife Vanessa, who was well-aware of his activities and wanted him to let it all go. Though he loved her, she eventually left him after being briefly kidnapped by Silvermane.

Over the entire series, the Kingpin is responsible for a number of defining moments and events, either directly, or indirectly (as well as the actions mentioned above). These include, but are not limited to:

The Kingpin has also recruited a handful of famous and infamous villains onto his payroll: 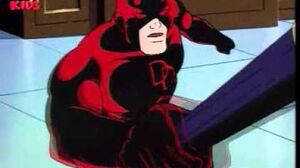