Kingpin (Spider-Man vs. The Kingpin)

Spider-Man vs. The Kingpin

Kill Spider-Man and/or frame him for his crimes.
Conquer the world (all dependent on ending).

Wilson Fisk, better known as The Kingpin, is the titular main antagonist of the 1991 Sega video game Spider-Man vs. The Kingpin.

He is a notorious crime boss and the most powerful gangland figure in New York City who also served as the sworn enemy of the heroic Spider-Man; so much so that their conflict escalates as Kingpin planned to destroy Spider-Man's reputation by framing him for the theft and detonation of a nuclear warhead.

In the Sega CD version of the game, he was voiced by Peter Renaday, who also voiced Ezra in The Haunted Mansion, General Tragg, Don Turtelli and Leatherhead ("Night of the Rogues" only) in the 1987 Teenage Mutant Ninja Turtles cartoon, Sean Keanan in Dead Rising, Alim Mualim in Assassin's Creed, and Sir George in Ben 10: Ultimate Alien.

In the original version of the game, the Kingpin makes his debut by anonymously broadcasting to the citizens of New York, declaring himself to be a "concerned citizen". He then claims that Spider-Man has stolen a bomb that will detonate and level New York in twenty-four hours, offering a $10,000 dollar reward for his capture. Knowing that Kingpin must have planted the bomb himself, Spider-Man begins pursuing the crime lord, and decides to start by following a lead about Doctor Octopus hiding out in a waterfront warehouse. The lead proves successful, and Spider-Man interrogates Doctor Octopus about Kingpin's plan, learning that he has hired many of his greatest enemies, granting them the keys necessary to deactivate the bomb.

Following Spider-Man's defeat of the Lizard and acquisition of the second key, Kingpin makes a second announcement, proclaiming that Spider-Man has gone mad, destroying an abandoned warehouse and prowling through the sewers, and increases his reward to $50,000. Shortly afterwards, Spider-Man ponders how Kingpin is making his broadcasts, and—reasoning that he wouldn't pay for something that he could steal—deduces that he is siphoning power from the main power station, and using Electro to guard it. Spider-Man defeats Electro, thus preventing Kingpin from making anymore broadcasts. After defeating Sandman in Central Park, Spider-Man realizes that he is out of leads, but figures that Kingpin will now have to send his henchmen after him directly, and heads into the city.

Surely enough, Kingpin sends Hobgoblin and Venom after Spider-Man, who defeats them both; however, Venom escapes, and kidnaps Mary Jane Watson. Kingpin then contacts Spider-Man by broadcasting a frequency to his Spider-Tracers, announcing his kidnapping of Mary Jane (believing her to be the wife of his friend Peter Parker), and threatening to kill her unless he allows the bomb to be detonated in his name. Refusing to give in, Spider-Man tracks the frequency to Kingpin's underground lair, and defuses his bomb while battling against his minions once more. Spider-Man then confronts Kingpin himself, who has suspended Mary Jane over a vat of acid. If Spider-Man is unable to defeat Kingpin quickly enough, Mary Jane will be killed, enabling Kingpin to escape from the grieving Spider-Man. In the true ending, Spider-Man is able to defeat Kingpin and save Mary Jane, embracing her as the police arrive to arrest Kingpin.

Kingpin's appearance and role in the story is similar to the Sega Genesis version; however, his bomb threat is instead changed to releasing toxic waste into the harbor that will destroy the environment. In the Bad Ending of the game, Kingpin makes another broadcast to New York, declaring that the bomb has detonated, and in response he has located Spider-Man and sent the police to detain him. In addition to this, he claims to have accepted a nomination in the upcoming mayoral election, and will restore law and order to the city, presumably succeeding in seizing power afterward.

In the Sega CD version, Kingpin makes his first appearance on the news, which is observed by Peter Parker and Mary Jane. He announces that Spider-Man has turned against New York, displaying manipulated footage of him committing crimes, before revealing that he has stolen a nuclear warhead from a military base, which will detonate in twenty-four hours. To ensure that Spider-Man is captured and formed to reveal the location of the bomb, he offers a $500,000 reward, while the real Spider-Man moves to stop the bomb and Kingpin. Tracking Doctor Octopus down to a waterfront warehouse, Spider-Man interrogates him about Kingpin's plan, learning that there really is a bomb, which can only be deactivated through the use of five keys. Spider-Man questions why Kingpin would want to destroy his own city, with Doctor Octopus replying that his plan isn't about "one measly city", but rather world domination, as well as destroying Spider-Man at the same time.

Spider-Man continues to track down Kingpin's minions, collecting keys from Electro, Mysterio, the Lizard, and Sandman. From J. Jonah Jameson's office, Spider-Man observes Kingpin's second broadcast, in which he states that he is increasing his reward to $1,000,000, and that any information regarding Spider-Man's whereabouts should be delivered to the Fisk building. Immediately after this, the news reports that Mary Jane has been kidnapped by "Spider-Man", with a demand being made to Kingpin to call off all attempts to capture him, or else he will kill Mary Jane; the real Spider-Man declares that Kingpin has gone too far, and that he won't rest until Mary Jane is safe and Kingpin is behind bars. After acquiring the final key from Hobgoblin and Venom, Spider-Man arrives at Kingpin's lair, disabling the bomb and defeating his enemies once more, as well as Bullseye and Typhoid Mary.

Spider-Man faces off with Kingpin at last, with Mary Jane being suspended over a vat of acid; after which, two possible bad endings can occur. If Spider-Man is defeated by Kingpin, he will taunt his enemy, lowering both him and Mary Jane into the acid. If Spider-Man is unable to defeat Kingpin before Mary Jane is lowered into the acid, Kingpin will taunt his enemy over her demise as he is being arrested by the police, promising to meet him again. In the Good Ending, Spider-Man defeats Kingpin and saves Mary Jane, announcing to the police that Kingpin is the true mastermind behind the bomb. As he is being dragged away, Kingpin declares that Spider-Man is merely wasting the officers' time, as his lawyers will have him out by dinnertime. Whether or not Kingpin managed to evade justice is unknown. 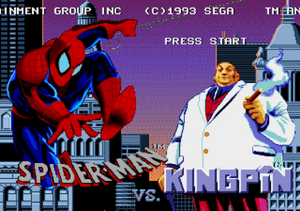 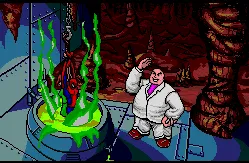