Member of the Ōtsutsuki Clan

Help Momoshiki with his goals

Kill Sasuke for cutting his horn off

He was voiced by Hiroki Yasumoto in Japanese and Wally Wingert in English.

Much like other members of the Ōtsutsuki clan, Kinshiki had pale skin and light colored blue-tinted hair. He was a tall burly man who was big enough to allow Momoshiki to sit on his shoulder. He wore white robes and pants. In some of his appearances, the robes would cover a portion of his face. He also had large hands and as a member of the Ōtsutsuki clan, he had Byakugan eyes.

Kinshiki Ōtsutsuki, was a loyal servant to his foster son, Momoshiki. He was willing to protect Momoshiki from danger during his battle against his enemies shortly before turning into a chakra pill from Momoshiki. Kinshiki was also a fierce fighter who never let up on his enemies in battle like Sasuke Uchiha and took them as serious threats. His devotion to his foster son was so great that he even willingly allowed himself to be turned into chakra fruit so Momoshiki could gain more power, and showed no shock, anger or sadness when his foster son did so sadistically without a second thought. Kinshiki wasn't above giving compliments, as when he caught Sasuke Uchiha at one of Kaguya's temples, he expressed his amazement that anyone besides the Ōtsutsuki could find it. For all his stoic disposition, Kinshiki was capable of being as vindictive as Momoshiki, as after losing his horn to Sasuke, he relentlessly tried to kill the Uchiha whenever they crossed paths, even going as far as to try and murder the mans daughter for revenge.

Kinshiki also had the ability to use chakra to make solid weapons like blades in his battles. With his superhuman strength, the use of the blades could cause a lot of damage and harm to others.

In the anime, Kinshiki was capable of using Space–Time Ninjutsu to transport himself to a destination.

Like the rest of his species, Kinshiki possessed the Byakugan, and likely all of it's abilities.

In the past, Kinshiki was fostered under another Ōtsutsuki and through unknown circumstances, his guardian sacrificed themself to give Kinshiki their power. Kinshiki was later assigned to Momoshiki as his guardian and foster son. Another member of their clan, Kaguya Ōtsutsuki, came to care for the planet she was assigned to harvest Chakra Fruit on, even falling in love with one of it's inhabitants, and betrayed the clan, nearly killing her own partner Isshiki in the process. Eons later, Momoshiki, Kinshiki and another member of the clan, Urashiki, grew curious on why Kaguya had not supplied the clan with Chakra Fruit, and decided to investigate.

Kinshiki first appeared in the film engaging Sasuke in a fierce battle in a castle in another dimension. Kinshiki was close to killing Sasuke until he escaped from him. Kinshiki and Momoshiki followed Sasuke to his dimension and came across Killer B, the eight-tails Jinchūriki. Momoshiki defeated Killer B and took his chakra and later went to the Hidden Leaf Village to go after the Nine Tailed Demon Fox inside Naruto Uzamaki.

While in the other dimension, Momoshiki was taking his time trying to suck out the Nine-Tails chakra from Naruto until the four other Kage, Sasuke, and Boruto Uzumaki appeared in the dimension to save Naruto. Kinshiki and Momoshiki took on the new fighters and Kinshiki ended up knocking back his enemies by knocking down the God Tree to protect Momoshiki. Kinshiki vowed to protect Momoshiki but Momoshiki decides to turn Kinshiki into a chakra pill and consume him so that he can become much more powerful. 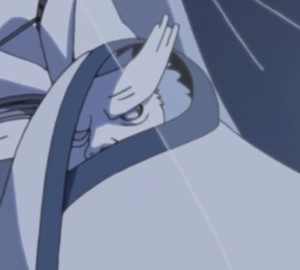 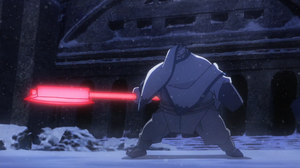 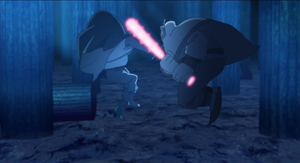