Member of the Black Dragon clan.
Goddess of Death.

Selling weapons on the higher bidder.

Manipulating her opponents to let their guard down.

Gain the god-like powers of Blaze to become a goddess of death.
Kill Kobra for stealing Blaze's powers from her.

Kira is one of Kabal's new Black Dragon Clan recruits and a villainess from the Mortal Kombat series of fighting games. She also has a romantic interest in her partner Kobra, but was willing to kill him or let him die because of her loyalty as a Black Dragon came first.

Kira used to operate as a weapons dealer for terrorists in Afghanistan, but had to disguise herself as a man. However, during a transaction, her gender was revealed and she was forced to fight her way out. As Kira emerged the victor, she met up with Kabal, who had been waiting to see what happened. She was then recruited as part of his new Black Dragon Clan since she had a cold and calculating personality that the Black Dragon lacked. Kira devoted herself to her new organization and later assisted Kabal in freeing another recruit, Kobra. The trio then went to Outworld, where they assisted Havik, cleric of Chaos.

Later during the events of Armageddon, Kira and Kobra were assigned to guard a bridge in the Botan Jungle. They encountered Taven who needed to get across and Kobra fought him, while Kira went ahead to regroup with Kabal.

In her ending, Kira defeated Blaze, gaining divine power, but Kobra was slain in the battle at the pyramid. She channeled her energy into him, which slowly returned him to life, but as he gained consciousness, he reveled in the power surging through him. Thus Kobra refused to let Kira sever the connection and then killed her, stealing all of her power for himself. However he felt no remorse, since he felt that she was weak and should have left him dead. That is the Black Dragon way.

In Kobra's ending, he defeats Blaze and assumes the power of the gods. He further demands that the Elder Gods give him control over all realms. They do so, but insist that he must have a queen to rule alongside him, as every king needs one. Kobra chooses Kira as his queen, and the Elder Gods transform her into a goddess of death. When Kira kisses Kobra, he is turned into a pile of ashes, as a lesson to all others that make demands of supreme beings like the Elder Gods.

Kira made a cameo appearance when she is chained at Kahn's Arena.

Kira is a skilled fighter and wields a pair of knives called Dragon Teeth, which she is quite skilled with. She can perform the curled up cannonball attack like the one used by Kano and she could also use Sonya's kiss of death. Kira can also use a purple fireball attack. 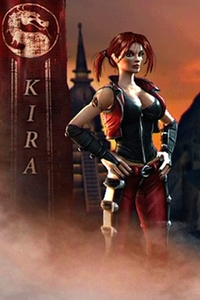 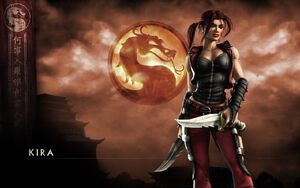 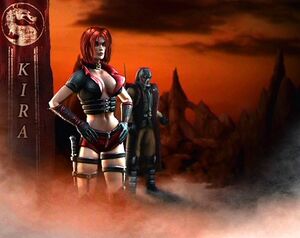 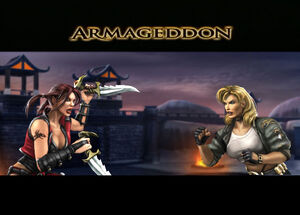 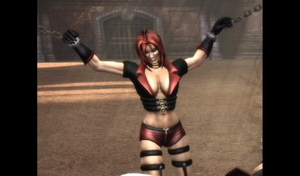