Go to a club

Kill an unnamed Russian agent and its source in order to steal the "Neski files" for Yuri Gretkov and incriminate Jason Bourne (succeeded).

Conspiratorial Assassin
Kirill is the central antagonist in the 2004 action/thriller film, The Bourne Supremacy, the second installment of the Bourne series.

He is portrayed by Karl Urban, who also portrays Black Hat in Priest, Julius Caesar in Xena: Warrior Princess and Hercules: The Legendary Journeys, William Cooper in Red, Billy Butcher in The Boys and Skurge in Thor Ragnarok.

In Berlin, Germany, CIA officers under Deputy Director Pamela Landy are paying $3 million for the "Neski files", documents about the theft of $20 million seven years earlier. Kirill originally frames Jason Bourne by planting his fingerprints and proceeds to kill the agent and the source, stealing the files and money and giving them to Yuri Gretkov.

Tying up loose ends, Kirill arrives in Goa, India, to kill Bourne, but the protagonist spots him and flees with his girlfriend, Marie Kreutz. As he and Marie drive away, Kirill sees Bourne in the driver's seat. As the American spy and Marie drive over a bridge, they switch seats, Bourne preparing to leap from the car and ambush Kirill. The Russian agent does not see the seat change and fires at the driver with a sniper rifle, still thinking it is Bourne. Marie is fatally struck and the car crashes off the bridge into a river. Jason ends up escaping having to leave his love behind. Kirill believes that Bourne is dead. However, Bourne narrowly escapes and leaves for Naples, Italy, with money and passports in an attempt to learn why he is again being targeted and to put an end to Operation Treadstone's pursuit of him for good.

Back at Berlin, Landy finds the planted fingerprints and goes to CIA headquarters in Langley, Virginia, to find out whose they are. She discovers that they belong to Bourne and finds out about an operation codenamed Treadstone. Landy confronts  Ward Abbott, as he admits that he had Conklin killed after a failed mission and has no idea where Bourne is. Landy tells Abbott that the CIA agent who stole the $20 million was named in the stolen files. After that, the CIA was sent out to hunt down (and kill off Jason Bourne).

Bourne breaks into Abbott's hotel room and records a conversation between him and Gretkov that incriminates Abbott and Gretkov in the theft of the money. Abbott also confesses that he ordered the assassination in Goa, Vladimir Neski's murder by Bourne, the murder of the agents by Kirill, and the planted fingerprints at the scene. Bourne departs after refusing to kill Abbott, telling Abbott that he won't out of respect for Marie's values. As Landy arrives to confront Abbott, he shoots himself with a handgun that Bourne leaves behind in the room. Bourne sends the tape of the confession to Landy.

When Bourne goes to Moscow to find Neski's daughter, Kirill is interrupted in his personal time at a nightclub by Gretkov, who instructs him to finish the job he was supposed to have completed. Kirill tracks Bourne via a police radio, locates him under a bridge and shoots him, wounding him in the shoulder. He is apprehended by police before proving his identity and takes off after him in his car. After an extended high-speed pursuit through Moscow, Bourne eventually forces Kirill to crash his car in a tunnel, horribly injuring him. Jason gets out of his car and approaches Kirill's vehicle with his gun drawn, but after seeing the severity of Kirill's injuries, he lowers his gun and walks away, staying true to his statement to Abbott that he won't murder those responsible for Marie's death. Immediately after this Gretkov is arrested by Russian police due to Landy providing them with the evidence she got from Bourne. 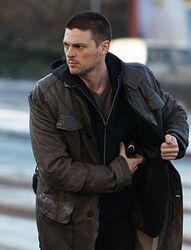