Grand Inventor to the Duke of Serkonos

Improving his Clockwork Soldiers.
Studying each intruder in his mansion to assess them.

Force Anton Sokolov to assist him in finding a way to make the creation of Clockwork Soldiers more affordable.

Create an army of Clockwork Soldiers.
Find out the purpose of the Void.

Creating clockwork soldiers to oppress and attack any dissenters

Kirin Jindosh is a major antagonist in the 2016 video game Dishonored 2. He is encountered in the fourth mission, "The Clockwork Mansion".

He was voiced by John Gegenhuber.

Jindosh was a member of the Academy of Natural Philosophy were he was taught by Anton Sokolov. However, Jindosh was expelled from the Academy for reasons unknown. He continued inventing nonetheless, inventing gimmicks like the Silvergraph (a photograph machine). His breakthrough was the invention of Clockwork Soldiers, mechanical soldiers which could be used as guardians. Jindosh also built an elaborate and luxurious mansion in the Aventa District of Karnaca, where he could move walls, floors or even entire rooms by pulling different levers. He even encouraged criminals to break into his home, using the oppurtunity to assess their different strategies which he would later use to make his Clockwork Soldiers better. No one who entered Jindosh's home uninvited left again.

Jindosh was eventually named Grand Inventor and became an ally of Duke Luca Abele. On Abele's order, Jindosh was part of the group that performed a séance at Aramis Stilton's manor, resulting in Delilah Copperspoon's return from the Void. Jindosh was particularly fascinated by the Void, as it defied all rationality.

As part of Delilah's and Luca's conspiracy, Jindosh helped Breanna Ashworth create the Oraculum. However, the lenses he delivered were mediocre and almost cost Ashworth her magical powers.

After Jindosh's former mentor, Anton Sokolov, has been kidnapped by the Crown Killer, he is brought to Jindosh's Clockwork Mansion. There, Jindosh keeps Sokolov prisoner in his Assessment Chamber, intending to either convince or force Sokolov to help Jindosh find a way to reduce costs for the production of his Clockwork Soldiers - which at the moment are exorbitantly high. Sokolov refuses however and remains prisoner for Jindosh.

After arriving at Karnaca and eliminating the Crown Killer, either Corvo Attano or Emily Kaldwin infiltrate Jindosh's Clockwork Mansion to save Sokolov and to eliminate Jindosh before he can build an army of Clockwork Soldiers.

The moment a lever is pulled in the mansion, Jindosh is alerted to the intruder's presence. Via loudspeakers, Jindosh invites the intruder to meet him face to face at the Upper Gallery. The player can either meet Jindosh, who will speak to the player from behind a secure glass door and will deduce his identity, or continue venturing through the mansion. After contacting Emily or Corvo on the Upper Gallery, Jindosh returns to his laboratory where he remains throughout the mission. Using the loudspeakers, Jindosh will continuously comment if the protagonist does something, for example entering a certain room or eliminating Clockwork Soldiers.

Should the player not pull any levers or alert any Clockwork Soldiers, Jindosh will not be alerted and will remain in his laboratory. He will also not comment on the protagonist's actions.

Jindosh can be eliminated by every weapon or power of the protagonist. Additionally, he can be killed by his own Clockwork Soldiers guarding the laboratory. If their head units are shot off, they switch to auditory detection. If Jindosh makes a sound, the Clockwork Soldiers sense him as a threat and attack him.

If Jindosh is eliminated with a sword, a special animation plays. The player kicks him between the legs, causing him to collapse and fall on his knees. Emily then yanks him up by the hair and rams her sword into his neck.

To be able to eliminate Jindosh non-lethally, Corvo or Emily must at first inform themselves about Jindosh's electric chair. They find out that Jindosh built an electric chair in hope to be able to mind-control his victims through it. However, the experiment was a failure and instead destroyed important brain functions of those it is used on - basically shocking the subject stupid. Jindosh can be placed on the chair and, once a little puzzle has been solved to bring power to the chair, he can be electrocuted. Now too stupid to continue inventing or to build further Clockwork Soldiers, Jindosh has effectively been removed as a threat.

Due to their exquisiteness, there is only a limited number of Clockwork Soldiers and each of them costs a fortune. Furthermore, Jindosh only sells the soldiers to aristocrats or to friends or allies of the Duke of Serkonos. However, when the Duke orders Jindosh to create an army of these soldiers, Jindosh is forced to find another, cheaper way to build his machines. When Anton Sokolov is delivered to him, Jindosh attempt to force Sokolov to assist him in building the army but remains unsuccessful. 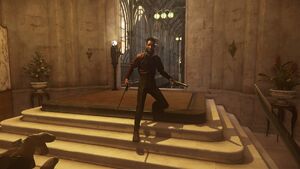 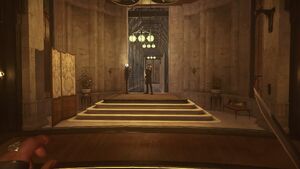 Jindosh attempting to shoot the protagonist. 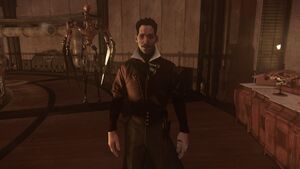 Jindosh guarded by his Clockwork Soldier. 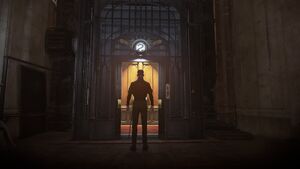 Jindosh returning to the office in his laboratory. 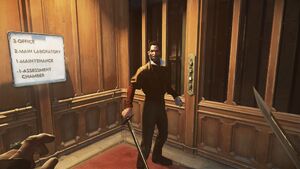 Jindosh fought in the elevator.