Lord of the Eastern Lands

Leader of the Four Perils

Eating grapes.
Sitting on his throne.
Watching the stars.
Traveling around the world.

Kill Half-Demons to prevent the prophecy of his demise from coming true.
Prove his superiority over his rival Tōga.
Find Akuru to be able to travel beyond space-time and start the "Degenerate Age" in the world.
Destroy the Grim Comet to prove himself stronger than Tōga's family and be admired by everyone, including his daughter.
Make Towa's body a vessel for Rion (all failed).

Kirinmaru is the main antagonist of the anime Yashahime: Princess Half-Demon. He is the younger brother of Zero and the father of Rion.

He is voiced by Yoshimasa Hosoya (who also voiced Third World's Herrscher of the Reason in Honkai Impact 3rd, Wave in Akame Ga Kill!, Reiner Braun in Attack on Titans, IV in Yu-Gi-Oh! ZEXAL, and Kaigaku in Demon Slayer: Kimetsu no Yaiba) in Japanese and Crispin Freeman (who also voiced Itachi Uchiha in Naruto series, Alucard in Hellsing, Kirei Kotomine in Fate/Zero, Fuuma Monou in X, and Duskmon in Digimon Frontier) in English. Both actors also voice Kirinmaru's second incarnation, Osamu Kirin.

Kirinmaru appears as a tall and muscular man. He has tan skin with pointed ears, green eyes, and bulbous, long, red hair. He seems to have dragon scales filled his forehead and right cheek, two blue stripes on his left cheek, and later a minor scar on his left cheek that he eventually gets after his encounter with Towa. Expectedly from a bestial daiyōkai, he has sharpened nails of a greyish-purple coloration. Kirinmaru's appearance has many characteristics of Qilin, Chinese Unicorn, than Dragon's. In Resonance, it has blue symbol on his right arm, similar to Osamu Kirin's glowing symbol as he going to communicate the Sacred Tree of Ages in Episode 28.

He wears a grayish violet and black suit armor with a golden plate on his left shoulder, a golden thin trim with a small ribbon, and a red belt across his waist with two golden plates as a buckle. He also wears a purple and lavender long-sleeved top, a black hadagi undershirt, darkened reddish baggy pants, and black battle boots with beige cuffs and golden adornments.

He wears a pair of black-armored gauntlets decorated with the same adornments as his boots and a white dragon-shaped mask with several red markings and two golden plates on each side leaving only his left eye visible along with the stripes on his left cheek.

On his true demonic form, Kirinmaru's face becomes more monstrous with two horns emerging from his forehead (the left one being shorter, because it has been cut by Tōga), long fangs, and more feral eyes with purple marks on his eyelids and longer messier darker eyebrows. His left arm drastically changes into a draconian green with several spiked protrusions during the fight, but 600 years ago, it was normal during the fight, and in the present in the feudal era, it was normal without the fight in Episode 28.

Kirinmaru is a cold and detached individual, speaking the bare minimum most of the time. He is emotionally distant to even his closest followers as he did not remember Tōkotsu, who was one of his four central lieutenants, much less that he even gifted Tōkotsu the red Rainbow Pearl in the first place. Upon learning of his demise, Kirinmaru showed apathy, merely giving some praise to Sesshōmaru's twin daughters, who terminated him as he reasoned that anybody serving under him must have been quite a powerful fighter. Even with the likes of Kyūki, who he does remember, he showed no care for her death too. He even treats his own half-sister with mostly formality, as when Zero woke him up, Kirinmaru treated his sister with a to-the-business attitude. When he and Sesshōmaru briefly joined forces to kill Inuyasha and Moroha, he immediately engaged them while responding to Kagome's defiant refusal to hand Moroha over to him with a cold rebuttal. He could also show an authoritian demeanor, as he remained unmoved by Zero's wishes to kill Sesshōmaru's twin daughters.

He seems to have a dark sense of humor as he chuckled at Jaken's claim that Inuyasha and Kagome would be paying their respects to his rival's tomb and sarcastically commented Sesshōmaru when he saved Towa and Setsuna from him that even someone like him still cares for his children.

According to Riku, Kirinmaru hates humans and half-demons. It seems, however, that he is mostly apathetic and believes himself superior over them and he simply upholds the old belief of demons that half-demons are inferior to pure demons and their worth depends on their ability to survive, but he has no intentions to go through killing all half-demons, and is more than willing to acknowledge them whenever they prove formidable opponents: though Zero indicated he shared Sesshōmaru's initial views of such creatures, with Kirinmaru expressing shock that his rival's older son would marry a human, and he did scoff at Kagome's defiance and vow to stop him from killing Moroha, when he was first woken up, he acknowledged Inuyasha as having the strength to alongside his half-brother destroy the Grim Comet and showed no inclination to slay him until he learned Kagome had given birth to a quarter demon daughter and even then when he and Kagome were instead sealed into the Black Pearl, Kirinmaru accepted it when Jaken reasoned that Inuyasha's Meidō Zangetsuha would be needed in the future with no protest at all. Even with the prophecy that he would be defeated by half-demons, Kirinmaru never sought to kill al half-demons in existence and proved disinterested in going after Towa and Setsuna and freely acknowledged that he expected them to be powerful due to having such a mighty demon as their father. Even when Zero had specifically demanded Kirinmaru kill them, he still chose not to act personally just for that. He only decided to fight them when they were about to reach his ship and despite showing his belief that half-demons should not exist and repeatedly mocking them, he freely admitted that Towa truly was his rival's granddaughter after she managed to land a blow on him.

Despite Kirinmaru's apparent cold demeanor, he is truly an honorable warrior who firmly believes in proving oneself in combat through rightful means and has a code of morals. He refused to take advantage of Tōga's weakened state to have him killed and take Japan for himself, even chastising Kyūki and Konton for ever so much as suggest it, and even ordered Riku to aid on Tōga's healing, as he thinks an underhanded victory would never leave one truly satisfied. Kirinmaru was also shown to have a firm belief that any power one wields must be their own and holds the Rainbow Pearls and Shikon Jewel both in contempt over the fact many demons desire their power, to where he refers to the Shikon Jewel as a worthless orb and though he entrusted the Pearls to the Shikyō, it was clearly more out of a desire to keep it in safe hands instead of enhancing their abilities, being uninterested in their deaths and the fact that the Pearls were removed from them and he scoffed at the Half-Demon Princesses for having relied on the Rainbow Pearls for so long they aren't able to naturally manifest their powers while never trying to recover the Pearls while they still had it. Zero even stated that Kirinmaru was uncompromising when it came to his standards. Considering Zero's wish that brought the Rainbow Pearls to existence as being a grave dishonor, Kirinmaru also shows his standards and honor extends to his own sister, as he has repeatedly shown himself to be unnerved by her malice and sinking into new lows to fulfill her dark desires to where he eventually decided to put a stop to it by scattering the Rainbow Pearls through the land, showing his contempt towards the Pearls as a whole. He could also show sincere respect and reason towards those who had earned it, as shown by how he treated Sesshōmaru's mother with the formal title of your ladyship even when she no longer ruled the Western Land and showed respect towards Sesshōmaru despite his failure of finding Akuru's pinwheel and apparent desire to take care of his daughters, going as far as to bow to him and sincerely apologize for Zero breaking Tenseiga and agree to prevent Zero from unleashing her wrath upon his daughters. He seemed to genuinely regret killing Setsuna and even lamented she couldn't be resurrected as the Tenseiga was broken. When he had defeated Towa and Moroha, instead of killing them, he instead patiently waited and watched over them until Towa woke and sincerely praised her for the good fight and expressed hope to meet her again in the future and he even showed the deceased Setsuna genuine respect by promising to remember her always.

In combat, Kirinmaru keeps a composed and controlled attitude: He believes firmly that warriors must be strong of mind, body and spirit and is quite willing to belittle his opponent when they fail to perform well but he seems to be more chastisizing than mocking when his foes fail to show mastery over all three crucial aspects of combat. He is also fully willing to compliment their performance when they actually managed to put up a fight against him. 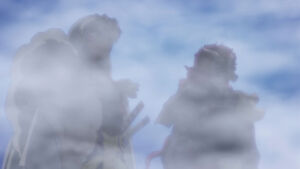 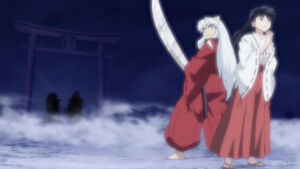 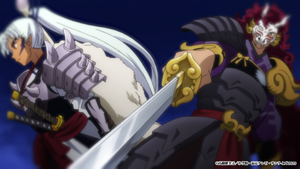 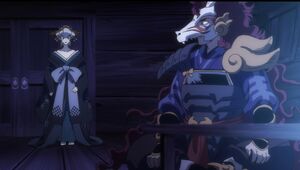 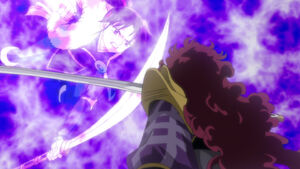 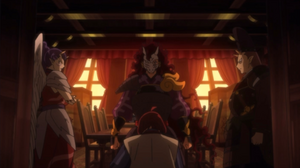 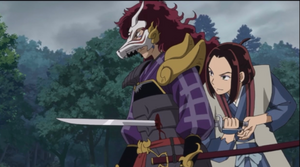 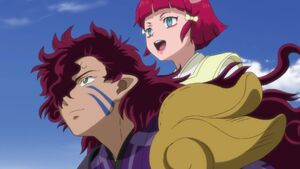 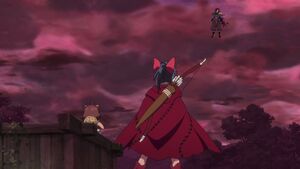 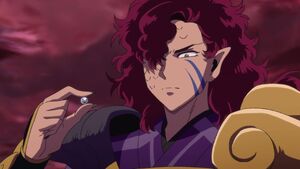 Kirinmaru's got the Black Pearl. 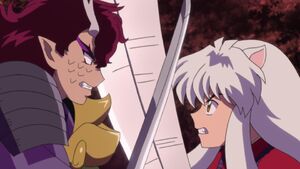 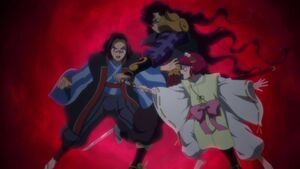