Ability to slash his opponents with his two sword-like blades

Kill anybody who reclaims Galaxia (failed).

Attacking people whom he thinks seeks the Galaxia blade

Kirisakin is a major antagonist and a super-powerful monster owned by NME who appears in the Kirby: Right Back at Ya! TV series episode "Crusade for the Blade". He plays an important role in the history of the universe.

Kirisakin was hired to steal the sacred sword known as Galaxia by NME. He did so, and went on to guard it deep within a mysterious and dark cave. Later, Meta Knight and fellow Galaxy Soldier, Garlude, were sent on a mission to recover Galaxia. Both were able to reclaim Galaxia, although it is at the cost of Garlude's life by Kirisakin's hands. Despite his lack of an actual sword, Kirisakin is an increasingly authoritative and remarkable swordsman, showing excellency in swordplay with the scythes that he has for hands. His scythes can also regenerate if they are broken.

In the present, King Dedede and Escargoon consulted with the NME Salesman telling him about a girl carrying a weapon with a peculiarly strange shape (in other words, Sirica), and the salesman suggested that they hire Kirisakin to track her down. Kirisakin finds her and Meta Knight, much to their horror. Sirica tries to fend him off, but is beaten. Sword Knight and Blade Knight follow, but they also don't stand a chance. Even Sword Kirby was bested by the destructive beast. However, Sirica was successfully able to pry Galaxia from the ground, so she throws it to Kirby. The two fumble for it, but Kirisakin eventually gets it. But thanks to Meta Knight, Sword Kirby (whose regular sword was broken earlier) grabs the heavenly Galaxia. Now Galaxia Kirby, he charges up the sword with light from the heavens, blinding Kirisakin. Finally, Galaxia Kirby jumps in the air and unleashes a powerful Sword Beam. The beam travels full force at the ape, who tries to block it. Even though, his attempt was unproductive and futile, and he is destroyed by the Sword Beam (which slices him in half).

Kirisakin is a huge, slender, muscular purple ape resembling a crossbreed of a gorilla and a mandrill. He has orange eyes on his gray face, and has a hot pink mouth with a green tongue and four fangs. To the sides of his mouth are yellowish-gray mustache-like hairs that are slightly similar to Escargoon's, and he has a silver horn on his forehead. He has tan callouses and feet with two pairs of claws on his feet. His pink stripes run down his back in a zigzag pattern. He has silver scythes for hands which have dark gray edges on their tops. 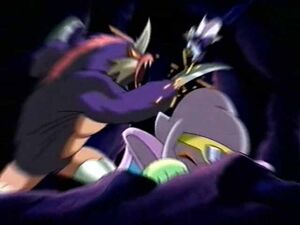 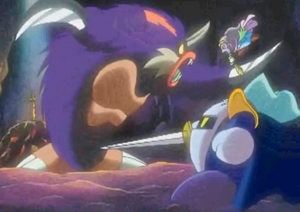 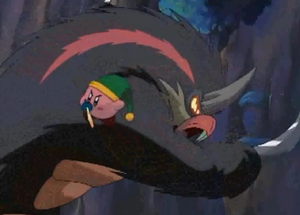 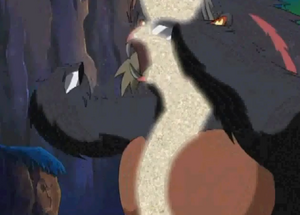 Kirisakin's demise.
Add a photo to this gallery

Retrieved from "https://villains.fandom.com/wiki/Kirisakin?oldid=3605530"
Community content is available under CC-BY-SA unless otherwise noted.