Leadership skills, Hacking, Getting people on his side

Defeat the Sibyl System, bring the Inspectors and Enforcers to justice, help criminals to clear their Hues

Kirito Kamui is the main antagonist of the second season of the anime series Psycho-Pass. He is a person who cannot be detected by any scanners or by the Dominators themselves. He aids and abets criminals, including Akira Kitazawa, with his ability to clarify their Hues.

He is voiced by Ryohei Kimura in the Japanese version and Clifford Chapin in the English version, both of whom also voice Kaito Yashio.

He has messy black hair and black eyes. He wraps his whole body with clothes and gloves, only face out.

In May 2099, Kamui is on board of an airplane with his elementary school for a school trip. However, the plane crashes into Mount Kumataka, apparently because of a problem with the airframe. While everyone else is killed during the crush, Kamui mysteriously survives.

Even if he has survived, his body is badly damaged and Kamui needs to go through difficult and risky surgeries. One of the involved doctors is Yohei Masuzaki. During the surgeries, various parts of the corpses of his deceased schoolmates are transplanted into his body. However, Kamui doesn't become a "ghost" until his new implanted parts are fully engrafted.

For unknown reasons Kirito has been giving people with clouded Hues a drug that can keep them their crime coefficient stable so they can go undetected by the Public Safety Bureau and do any crime they wish to do.

Kirito seems to care deeply about the people he "helps" as he started to cry when Akira Kitazawa was killed by the bureau. Kirito seems to have deep obsession with Akane Tsunemori as he broke into her home and wrote the words "WC" that stands for "what color" and he also thought Akane would understand his need to keep criminals safe from the Safety Bureau.

He has many similarities to Shogo Makishima such as being obsessed with an Inspector, in his case with Akane, while Shogo Makishima was with Shinya Kogami, both wanted to free people from the The Sibyl System and they are willing to killing innocent people to achieve their goals, they have followers who are willing to do anything they say, and both created an invention that can make people go completely undetected by the Sibyl system.

The big difference between Kirito and Shogo is the motivations to defeat the sibyl system, Kirito legitimately wants to help people and keep their Hues clear, while Shogo wants to create chaos to destroy the sibyl system for the sake of both vengeance and entertainment. 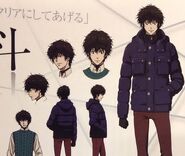 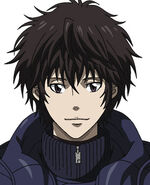 Add a photo to this gallery
Retrieved from "https://villains.fandom.com/wiki/Kirito_Kamui?oldid=3985062"
Community content is available under CC-BY-SA unless otherwise noted.