Win the Holy Grail and save the world.

Kiritsugu Emiya is the main protagonist of the light novel and anime series Fate/Zero (although as the story is told from seven different perspectives, this status is fairly debatable) and the Master of Saber during the Fourth Holy Grail War. Being an Anti-Hero, he has several personality traits commonly found in villains, such as ruthlessness and having a belief that there are no rules in battle beyond doing whatever is necessary to win. However, he is very tragic and not particularly proud of his methods, merely seeing them as a means to an end.

He is voiced by Rikiya Koyama in the Japanese version of the anime and Matthew Mercer in the English version, the latter of whom also voices Alvin.

He is mostly an anti-hero but does have his moments where he looks more like a villain protagonist. His villainous acts throughout the series include blowing up a hotel, manipulating people (refer to the episode 'The End of Honour' for a particularly heinous example) and refusing to acknowledge Saber's existence, to the point that he refuses to even talk to her, for no actual good reason at all. Their conflicting ideological perspectives make them unable to function together as a team, resulting in a strained relationship, in which Kiritsugu's wife, Irisviel von Einzbern, acts as Saber's proxy master and Kiritsugu attacks from the shadows. He's also perfectly willing to let Caster roam free on his child-killing rampage despite Saber's pleas to finish him off as quickly as possible, saying that saving a few children, or even a few dozen, is not their priority.

Besides his methods, Kiritsugu's goal is also similar to that of many villains; to re-create the world. However, unlike most villains of this type, Kiritsugu's goals are well-intentioned, as he desires to use the Holy Grail to create a world free of war or conflict.

Whenever someone questions his morals, Kiritsugu justifies his actions by saying that the battlefield is no better than Hell on Earth and so he believes that all forms of killing are the same. He also blames the Heroic Spirits for covering up the truth of war with their legends and that because of them, humanity's true nature hasn't taken a step past the Stone Age, implying a degree of misanthropy. While this logic does make sense to a degree, it is nonetheless flawed and merely suggests that Kiritsugu needs someone to blame for him having to be the one to save the world.

Kiritsugu's behavior stems from his past. He spent his youth going from one place to another with his father, Noritaka Emiya. They settled on Alimango Island for a year where he became friends with - and had a crush on - Noritaka's assistant, a local girl called Shirley who was four years older than him. However, disaster struck when Shirley became a vampire after she drank a potion, intending for it to prove that Noritaka's research would save the world, and plead for Kiritsugu to kill her but he refused and fled. Their village was overrun by Executors from the Church and Enforcers from the Association, both groups having arrived when they heard rumors of a magus researching into vampirism. Kiritsugu was the only survivor of the 'cleansing', saved by Natalia Kaminski, a freelancer and part-time Enforcer who wanted information on the magus responsible.

Returning to the hidden Emiya residence, Kiritsugu confronted his father on his research and Shirley's death. Norikata explained that he wanted to become a Dead Apostle to continue with his research on Magecraft longer. Horrified by his actions, Kiritsugu murdered his father in cold blood. He was taken away and raised by Natalia to become an assassin of heretical magi. Even as a child, he knew he couldn't save everyone but did want to save as many people as he possibly could. Plagued with guilt over sparing Shirley's life, (which ultimately caused the deaths of everyone on the island except him) KIritsugu from then on always put the needs of the many before the needs of the few, which eventually evolved into a desire to get rid of death and war completely.

In short, while Kiritsugu is a ruthless, calculating, stoic, emotionless, brooding, and cold-blooded killer, he was a tragic figure because the actions he committed to reach his ends ending up ruining everything for him. 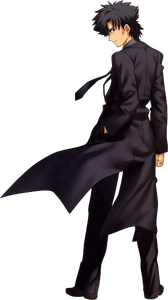 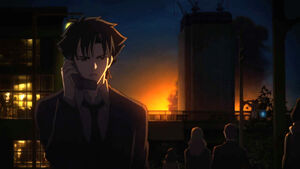 Retrieved from "https://villains.fandom.com/wiki/Kiritsugu_Emiya?oldid=4009278"
Community content is available under CC-BY-SA unless otherwise noted.