Monster of the Hidden Mist

Member of the Akatsuki

Protecting guarded secrets by any means.
Taking care of his Shark skin.

See a world devoid of lies.

He was voiced by the late Tomoyuki Dan in the original Japanese version, and Michael McConnohie and Kirk Thornton (who also voiced Akahoshi) in the English dubbed version.

Kisame is a member of the Akatsuki, so he wears a black robe with red cloud markings all over it. He also wears a head band that symbolizes the Village Hidden in the Mist, with a scratch on it. But what's most notable about Kisame's appearance is his shark-like skin. Kisame's skin is pale blue with six black markings on his face and shoulders, that appear to be gills, and razor sharp teeth. He also wields a giant sword called Samehada which it can eat chakra.

Kisame Hoshigaki has an immensely high amount of chakra. He has great physical strength. He is a skilled ninja and swordsman. He is also skilled with water style-based jutsu mainly involving shark-based attacks such as; Water Shark Bomb Jutsu. He also wields a giant sword name; Samehada which has the ability to eat other's chakra. He also can merge with Samehada to become a form he likes to call; the Tailless Tailed Beast.

Originally, Kisame was a ninja from the Village Hidden in Mist. He first started off as a subordinate under Fuguki Suikazan of Seven Ninja Swordsmen of the Mist. He was tasked to guard the Cypher Division and killed them when they were cornered by a Hidden Leaf squad under Ibuki Morino to keep their intel being leaked out. Eventually, Kisame learned that Fuguki was selling information to other ninja villages and killed him. Taking Fuguki's sword Sharkskin, a living weapon that absorbs an opponent's chakra, Kisame became a new member of Seven Swordsmen.

Though commended him for his loyalty, the killing his own people left Kisame disillusioned and see his life as a lie. He was then later approached by a ninja who claimed himself to be Madara Uchiha and was the power behind the Fourth Mizukage Yagura. Though first skeptical when "Madara" unveiled his Eye of the Moon plan, Kisame became one of the first and most loyal members of the Akatsuki when enticed with the promise of a "world without lies". Eventually, wanted for plots to overthrow the Feudal Lord of the Land of Water, Kisame became a rouge ninja was partnered to Itachi Uchiha, with hostility between them until that found common ground and became close friends.

Kisame accompanied Itachi to Konoha to abduct Naruto Uzumaki, over powering Asuma Sarutobi, Kurenai Yuhi, and Kakashi Hatake until Might Guy arrived. Though annoyed with Itachi's notion, Kisame is forced to fall back and continue their search. Once they find Naruto, Kisame uses Sharkskin to drain Naruto of his chakra as Itachi battles Sasuke. But before Kisame can amputate any of Naruto's limbs, Jiraiya arrives to his aid and drives him and Itachi off. Kisame later attended an Akatsuki meeting to discuss the events leading to Sasuke leaving the Hidden Leaf Village.

During the sealing of Shukaku, Kisame was tasked with delaying Team Guy, one of the two teams searching for the Akatsuki's hideout at the time, and was eager to get revenge on Might Guy for defeating him three years earlier. He used the Shapeshifting Technique on one of Sasori's sleeper agents to fight the team remotely. Ultimately, the sleeper agent was killed in battle.

Eventually, after capturing the Four-Tails Jinchuriki Roshi without a scratch on him, a saddened Kisame is tasked by Itachi to stand guard outside the Uchiha Hideout and to let only Sasuke through. Once Sasuke entered the Uchiha Hideout, Kisame engages Suigetsu Hōzuki, an old acquaintance, to combat with Sharskin going to the victor. However, Zetsu stopped the fight and Kisame later learns that Tobi is the ninja he met long ago. Tobi apologizes for the deception but regards Kisame to be truly loyal to his cause.

After Sasuke and Taka failed to capture the Eight-Tails Jinchuriki Killer B, Kisame is sent to clean their mistake by using Sharkskin to follow the trail of the Gyuki's chakra. During the battle, Kisame absorbed Sharkskin to assume his Tailless Tailed Beast form to have an advantage on Killer Bee, Sabu, and Ponta. However, Kisame was forced to cancel his transformation when Sharkskin was working against him to add Killer Bee due to the weapon's love for his chakra. Matters got worse for Kisame when the Fourth Raikage A and his two bodyguards arrived.

Luckily with Zetsu creating a clone of him to fake his death, Kisame fused into Sharkskin as Killer B claimed the weapon as his own. Kisame intended to study the Village Hidden in Clouds's plans for the upcoming Fourth Great Ninja War. However, having obtained the Nine Tails chakra, Naruto sensed Kisame and exposed him. Escaping, Kisame confronted Guy, who remembered all of their past encounters and was annoyed by Guy's failure to remember him. With Guy interfering in his attempt to deliver his findings to Tobi by shark, with Sharkskin no longer in his arsenal due to new loyalties to Killer B, Kisame battles Guy until he is defeated. Captured, with Aoba looking his mind for information, Kisame summoned three sharks to devour him to keep the opposition from getting an advantage while his scroll was safely delivered to Zetsu.

Kisame made an appearance in the chibi spin-off Rock Lee & His Ninja Pals. He appeared in Episode 38, alongside with Itachi arriving at the hideout. Upon seeing a disguised Lee, he starts to find him suspicious and says that the latter almost reminds him of a guy he once fought. To avoid being easily recognized, Lee changed the shape of his face by copying a face almost similar to Itachi's but Kisame still finds him suspicious.

After Pain announces that Lee and Deidara will fight, a disguised Guy and Neji (who is hiding under Guy's cloak) arrived and interrupts the fight by saying he's also a "new recruit" and he wishes to fight Lee. Upon seeing him, Kisame starts to find him suspicious as well. Later when the two "fight", they used a same styled technique, in which he starts to find the two more suspicious. Deidara tries to use this to help them escape but unintentionally gets hit by the "fight" and then unintentionally throws the clay beetle right at Sasori's face.

Sasori, angered by this, tries to teach Deidara a lesson by summoning his Third Kazekage but accidentally drags him, as well as Konan and Kakuzu, thus starting a fight. Later upon learning the truth from Tobi, Kisame along with the rest of Akatsuki beat up Deidara for not telling Lee is a spy. Kisame appeared again in Episode 47, where he went to Konoha. In this episode, it is notable that Kisame was able to enter the village as if he was a normal civilian instead of a criminal and is seen treating his weapon Samehada, as a pet dog rather than a weapon. He went into the village's dog cafe, brings Samehada into the cafe and pretends that it is a dog. 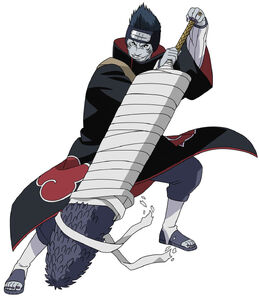 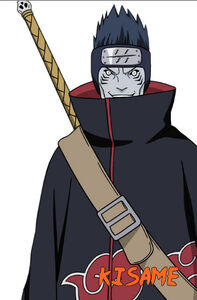 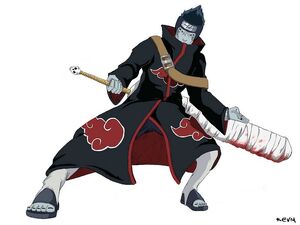 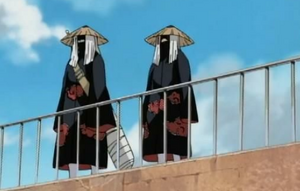