Kite Man is a villainous protagonist in Harley Quinn. He is Poison Ivy's ex-fiancée.

He is voiced by Matt Oberg.

Kite Man's parents are both superhumans, his father able to manipulate ice and his mother able to fly. Because their son had no inherent powers of his own, they always saw him as a disappointment. Unable to muster the courage to stand up to his parents, even as an adult, Charles initially became Kite Man out of a desire to please them, but as a villain, had little success. Some time in his past he developed a rivalry with Condiment King.

Kite Man first appeared when Ivy and Harley Quinn crashed The Penguin's nephew's bar mitzvah. There, he attempted to flirt with Ivy, but she found him annoying. Later, he stole one of Ivy's potions and used it on some kids to make them fall for her, not knowing that the side effect will also cause them to turn into trees and die. He then offered to fly her back to her apartment to get the antidote. However, while at the apartment Ivy discovered Kite Man in her room preparing to have sex, but he had misinterpreted the situation and she demanded he put his clothes back on. Ashamed, Kite Man then flew Ivy back to the Gotham Mint, apologizing for his behavior. He clumsily attempted to compliment her, but eventually just decided to be quiet and let Ivy enjoy the view over the Gotham City Park, which she begrudgingly admitted that she enjoyed, much to his satisfaction. Kite Man then arrived at the Gotham Mint where a conflict was developing between Harley and the Legion of Doom members present, forcing him to reluctantly join the fight on Ivy and Harley's side. He tried to take a weaker opponent, but ended up fighting Bane, who easily overpowered him. Eventually Bane released him and the fight resolved, allowing him to head home.

Ivy met Kite Man at his apartment for a date, having been secretly going out with him for some time now, and Kite Man gave her a bouquet of roses. Although she liked it, she still insisted on wearing a secretive outfit to protect her anonymity, and most preferred going to movies where she was even less likely to be seen. Kite Man, however, wanted to go out to eat the next time so he could "see and be seen". He indulged Ivy this time, but when next the opportunity presented itself, Kite Man made a reservation at a high-end restaurant, only for the restaurant to not respect his reservation and place him in a 40-minute wait that he insisted on staying for despite Ivy's desire to see another movie instead. There, more famous supervillains continued to cut in front of Kite Man in line, so he suggested that Ivy drop her name to get them a table. When he Ivy didn't want to, he presumed that she was being modest, and went to do so for her, but she nearly panicked and made him stop. Confused, Kite Man finally began to realize that she was ashamed to be seen with him, and so he had an effeminate, public breakdown, revealed her name anyway, and left in anger. Ivy later went to his apartment to apologize, where Kite Man was surprisingly understanding, saying that he genuinely cares about what she thinks (and also that he cares about, quote, "dat ass"). Despite his usual crude attitude, Ivy did admit that she "like like(s)" him in return, and finally admitted to the public that she was his girlfriend, filling Kite Man with pride.

Kite Man flies Harley and Ivy over towards Riddle U on his kite in order for them to blend in as college students and figure out how The Riddler has power and clean water. He made a joke about how he doesn't want Ivy to get jealous for helping to very attractive co-eds, with Harley finding it annoying while Ivy liked it.

Kite Man is quite perverted and unashamedly so, occasionally making 69 jokes and talking about "dat ass" while talking to Poison Ivy, and taking any opportunity to compliment her "bangin'" body. When they first met, he even went straight to her bedroom and disrobed in anticipation of having sex, although he sincerely apologized for misreading the situation. He is also unusually confident, referring to his kites as a "superpower" and not even hesitating to shoot "out of his league" by pursuing Poison Ivy. Insults and belittlements of his skill wash right off him, and he continues with a rarely broken cheerful and confident attitude about everything.

Despite his obsession with sex, immaturity, and other such faults, he keeps his attentions and praises focused solely on Ivy, and although he does indeed shrug off insults and worse from other people, he genuinely does care what Ivy thinks and particularly what she thinks of him. He dos show a degree of pragmatism towards Ivy, bringing her plastic roses on one date and live potted ones on another, rather than a bouquet of cut ones. Her initial insults to him are some of the few that genuinely bother him, and his dogged determination to shower Ivy with compliments does make her feel beautiful and loved, appreciating his clumsy compliment about her smile and his gift of roses with a proper planter to keep them alive. As Ivy puts it, against "all reason and logic" she does genuinely like him in return, and they've had sex in the past.

Kite Man is an average Caucasian man with a mostly green outfit. His primary outfit consists of bronze boots, matching gloves, light green pants, a matching shirt and a brown belt. He has a large, yellow, kite-shaped button on his chest which goes around his shoulders to his back and releases a kite out of its holder mechanism when pressed. He has a helmet-like piece of headwear which is the only piece of clothing he has not seen without on his person, consisting of a green cowl with yellow and orange visor covering his eyes for flight, small jutting out circles on the sides where his ears would fit into, and a yellow kite crest on his forehead similar the one he has on his chest. 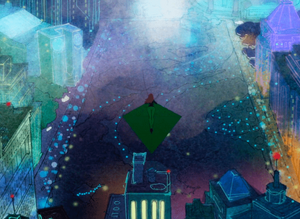 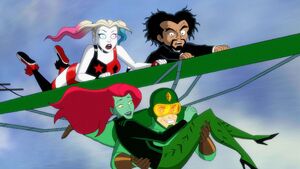 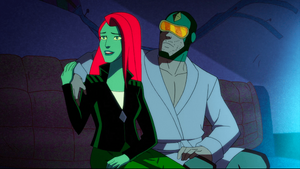 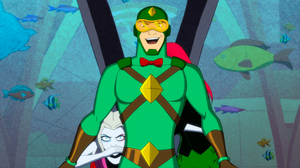 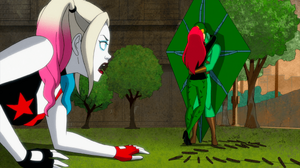 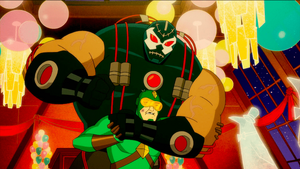 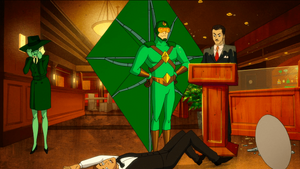 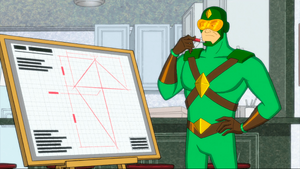 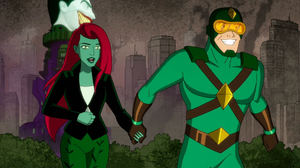 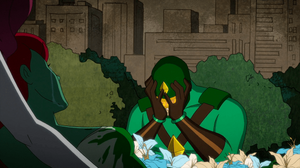 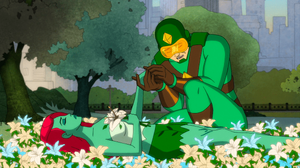 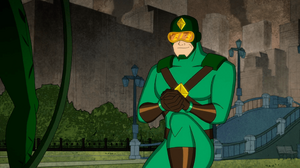 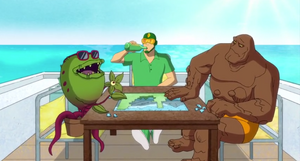 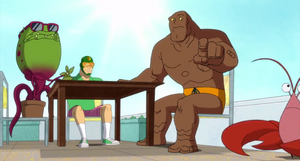 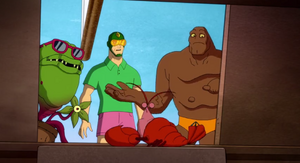 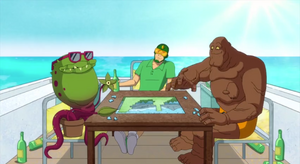 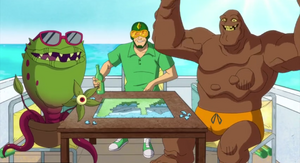 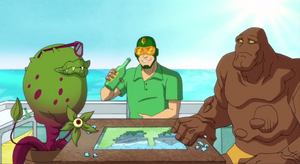