Kitiara is a recurring villain of the fantasy book series Dragonlance by Margaret Weis and Tracy Hickman. She is the half-sister of Caramon and Raistlin Majere.

Kitiara is a beautiful woman and a skilled fighter, but she's also ambitious, cold and manipulative and she has no qualms in betraying her allies at every opportunity.

Kitiara once fell in love with the hero Tanis Half-Elven, and later seduced the knight Sturm Brightblade, with whom she secretly had a child, Steel Brightblade.

During the event of the Chronicles of Dragonlance trilogy, she became the rider of the blue dragon Skie. While in Flotsam, she encounters Tanis disguised as one of her own soldiers and assumed that he too had enlisted. This meeting rekindled their feelings for each other, and she encouraged Tanis to stay with her as her lover. But Tanis came to his senses shortly after, and fled from Kitiara in self-disgust to rejoin his companions on their flight into the Blood Sea.

In the North, Kitiara led an attack on the High Clerist's Tower, the defence of which was commanded by Sturm Brightbladeand the Elven princess Laurana. In the course of battle, Kitiara killed Sturm and was recognized by Laurana and Tasslehoff Burrfoot.

Later, Kitiare allied herself with Lord Soth to attack the city of Palanthas. During the battle she's mortally wounded by Raistlin's assistant Dalamar and then she realises that Lord Soth wanted her as a undead bride.

Kitiara asked Tanis to save her but he let her be taken by Soth. 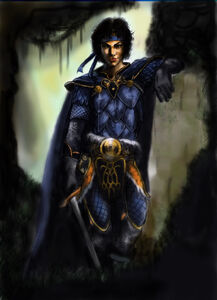 Add a photo to this gallery
Retrieved from "https://villains.fandom.com/wiki/Kitiara_Uth_Matar?oldid=4372221"
Community content is available under CC-BY-SA unless otherwise noted.