Various, but mainly involving of eating human organs to increase their powers

Each Kitsune have their own agendas.

Youkai Animals
Kitsune (狐 or 妖狐) are, simply put, the Japanese name for foxes - however, like the Tanuki, Kitsune play an important role in the culture and myths of that area due to strong animist beliefs that stated the animal world was as capable of developing human-level intelligence as we were, especially when animals grew to a certain age, upon which they were said to be granted supernatural abilities and transform into spirits known as yokai.

Like Tanuki the Kistune are a beloved spirit but are also a spirit known to cause trouble and as such kept at an arm's length, Kitsune delight in trickery and mischief - which can quickly grow to cruelty and malice, with Kitsune blamed for causing states of madness in some families (known as "fox possession") - even to this day some communities are wary of people from familities associated with this form of madness.

Kitsune are also known to guise themselves as monsters, giants and other terrible beasts so as to frighten humans or even hunt and kill them - they may also use their "fox lights" to lure unwary travellers into dangerous areas or simply cause them to become lost, Kitsune may also marry unaware humans and infiltrate high society as a result, some powerful and malicious Kitsune have even managed to influence the history of ancient Japan in this manner.

Like Tanuki some Kitsune are so powerful that small shrines are made to appease them and they may be great protectors of a village or a terrible curse, requiring the assistance of brave heroes or deities to banish - even then some Kitsune are highly resistant to being banished in this manner and may haunt an area for centuries before finally being defeated. 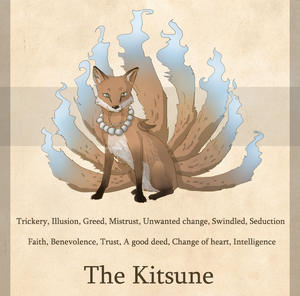 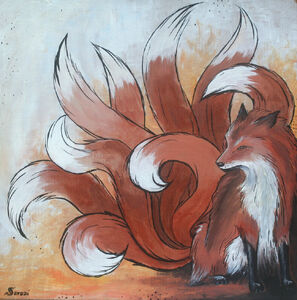 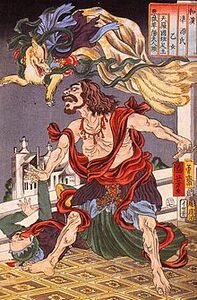