Daughter of a Rich Family

Get Whatever She Wants

Incompetent Supervillain
Kitten is a major recurring villain from Teen Titans Go!. She is the spoiled, bratty teenage daughter of Killer Moth. She is in love with Robin. However, Robin doesn't return her feelings, so she's dating the next best thing, Speedy from Titans East.

Kitten made her first appearance in "The Left Leg", where she robbed a bank. Despite Kitten being such a weak villain, Robin still suggested that the Teen Titans use the Titans Robot to fight her because he was just anxious to try out the new machine. Sadly for him, Robin was in control of the left leg, which he did not enjoy as he would have rather been the head. When Kitten left the bank, hauling a big sack of money, she moaned and bitched about how none of the mean bank tellers offered to help her carry her cash to her limo.

When the Titans Robot showed up, Kitten was immediately petrified with fear and she surrendered on the spot. However, due to Robin's refusal to follow the other Titans, he annoyed all of them by abusing the left leg, causing the robot to act ridiculous. Kitten noticed that this incompetent robot would pose no threat to her, so she quickly snatched up her bag of money and fled, successfully escaping with the stolen money.

In "The Titans Show", Kitten was one of the villains in the audience, watching The Titans Show. She was sitting right next to her father, Killer Moth.

At the end of "BBRAE", Kitten was seen dancing with Speedy, along with numerous other romantic couples, implying that Kitten must be dating Speedy.

Kitten is a short, blonde-haired teenage girl with light blue eyes and who wears mostly pink. She has a pink headband, a pink dress, pink gloves, pink tights, and a lighter pink skirt. She also wears white fluffy boots.

Kitten is a stereotypical bratty rich girl, who complains and whines about everything and expects to have everything handed to her. Due to her father being an illustrious multi-kazillionaire, with more money than he knew what to do with, Kitten never learned the value of a dollar and she spends her sizeable allowance with complete and total abandon. Being as pampered and sheltered and she is, Kitten has no way of dealing with any real threats from the outside world. That being said, when she's faced by the Titans and doesn't have anybody to help back her up, she is nothing more than a completely helpless, cowardly weakling, who can't fight to save her life. 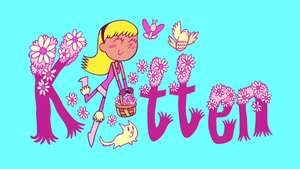 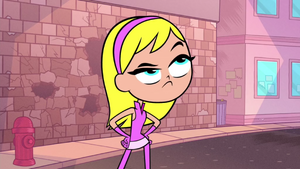 Kitten in the audience of The Titans Show.