Villains Wiki
Register
Don't have an account?
Sign In
Advertisement
in: My Little Pony Villains, Female, Teenagers,
and 25 more

Make a time loop until your show is perfect

She is voiced by Lili Beadoin.

As seen on Sunset's Backstage Pass, Kiwi and Supernova were struggling as they strolled until she saw a glow and that glow was a magic Time Twirler from Equestria, the Time Twirler made time repeat so she put the Time Twirler in her bow and began to redo the day for the show to be perfect.

Soon after Sunset and Pinkie arrived where they were and they started to fight, when the 4 girls went up on stage Sunset destroyed the magic object so Kiwi threw herself on the ground and started to cry so they started to make a great show.

She has pink hair, and behind her hair has a purple bow. Her blouse is Purple and Blue with heart prints, and her skirt is pink with a purple part with little yellow hearts. Her high heels are orange and purple and her eyes are blue, her skin is blue and her cheeks have two pink hearts.

She always wants perfection, she hates it when people are dumb or silly! When she wants something she does everything for that, she would threaten someone not to prevent her plans to have what she wants. When her plan goes wrong she cries and tries to blame others but she can overcome everything in a friendly way.

In the beginning, her only skills were singing, dancing, playing the guitar and possibly playing another instrument! But after she found the magical object she began to reset the world in a time loop. 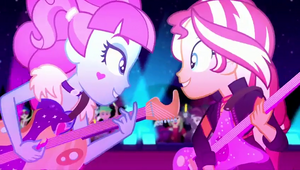 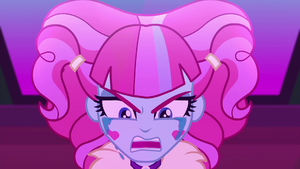 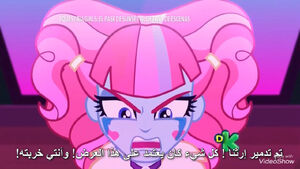