Villains Wiki
Register
Don't have an account?
Sign In
Advertisement
in: Articles under construction, Male, Protagonists,
and 52 more

Demon (by the Berkel Soldiers)

Bring Eara back to the Berkel Empire

Tragic Assassin
Kiyan is the main protagonist of the mobile game Inotia 4: Assassin of Berkel. He is a assassin from the Shadow Tribe.

Kiyan is a muscular young man under 20 years old with sliver hair and light blue eyes. He wears dark clothing with armor, a crimson scarf, necklace, and one black glove. Kiyan's arm is tattooed, which represents him as a member of his tribe.

Kiyan is cynical, unfriendly, rude, egotistical, and merciless towards anyone he meets. He calls Eara too skinny for his taste but later builds a bond and is protective towards her. Kiyan is usually foul mouthed and lacks the patience to battle.

Kiyan's past was dark and tragic due to being orphaned as a child. Later, a cardinal named Janus raised him and trained him into becoming his virtuoso of the the Shadow Tribe. He and his older brother named Azad were used as vessels for Moar the dark prince. Cardinal Janus treated Kiyan as a successful being while he treats Azad as a failure.

As a trainee assassin of his tribe, he was ordered by a member to meet with Darius who is vice leader of the Shadow Tribe. He planned to assassinate the Grafton, Earl of the Berkel knights. He went to the forest and took many soldier's lives. Kiyan headed inside the caves and encountered the Earl and killed him. After the mission was completed, he met a mysterious girl in a white dress named Eara, the channel of light and she he brought his weapon to attack her and was begged by her to spare her life. He remarked her as skinny which made her insulted. After leaving the caves, he reported to Darius that he destroyed Earl Grafton and was considered the best assassin of his tribe. 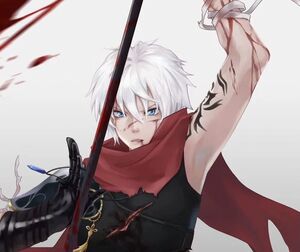