Scientist for the Kougami Foundation (formerly)
Leader of the Greeed

Destroy the world while it is "pure".

Nihilistic Scientist
Kiyoto Maki (真木 清人, Maki Kiyoto) is a researcher for the Kougami Foundation who leads the Greeed in the present day and the main antagonist of the Kamen Rider OOO series.

He was portrayed by Yu Kamio as an adult and Hayato Watanabe as a child.

As a young boy, Maki greatly loved his older sister Hitomi despite her abuse towards him. Hitomi told Kiyoto that the true value of something is only known when it ends, which became Maki's personal philosophy. Before the day of her wedding, Hitomi gave Maki a doll named Kiyo-chan so that he could have someone to talk to as a surrogate for her due to his difficulty of talking to others. However, jealous of his sister spending time with someone else, Maki set a fire in Hitomi's bedroom that killed her and burned Kiyo-chan's hair off. Some time after, Maki suppressed all memories of the event and Hitomi's cruelness, instead believing the fire was an accident and that Hitomi was kind.

Maki was later employed into the Kougami Foundation by Kougami. In the foundation, Maki studied the Cell Medals and developed many of the Candroids along with the Birth Driver. Maki first appeared to Eiji, Kamen Rider OOO, and Ankh when one of his assistants, a bomber named Tadano, was targeted by Mezool to use his desire to blow things up to nuture her Yummies. When Eiji learned that he knew, Maki finds himself leaving in panic after Eiji caused the puppet on Kiyoto's shoulder to fall off. Maki then continues his work and research on OOO before changing his study to the Greeed the effects of Core Medals on them, forming a partnership with Kazari to achieve what seemed to be a mutual agreement to evolve Kazari through the other Greeeds' Core Medals. When Akira Date became Kamen Rider Birth, Maki finds himself in a situation when Akira moves into his lab that further worsened when he learned that Kougami knew of his partnership with Kazari and threatened him to end it.

However, while protecting Chiyoko from the Shachi-Panda Yummy, the embodiment of his unfulfilled desire for maternal affection, Maki's repressed memories of Hitomi resurfaced as he reaffirmed his belief that the world should be ended, while it could still be remembered as something good and pure. Destroying all traces of his research, Maki left the Kougami Foundation to work with the Greed while he also stole the ten purple Core Medals that destroy desire. Placing half of the purple Core Medals in his body, Maki gains the ability to create Yummies while eventually transforming into a Greeed. Wanting to complete the Greeedification, Maki needs the rest of the purple Core Medals that are inside Eiji.

After making a deal with Ankh to make him house all the Core Medals, willing to follow his plan if it means completing his own, Maki steals the Core Medals in Kazari's body after he is heavily injured by OOO and leaves him to die. He then gives the pilfered Medals to Ankh, and is disappointed when the bird Greeed expresses more ambition than just the desire to be complete. Eventually, Maki mortally wounds Ankh and decides to make the last other remaining Greeed, Uva, the vessel of the Core Medals. As Maki leaves Kiyo-Chan to Chiyoko, no longer needing it for mental support, he oversees Uva's transformation into the Medal Vessel as his orchestrated apocalypse begins. However, the Kyoryu Greeed finds himself facing Ankh and Kamen Rider OOO in his PuToTyra Combo. Surviving OOO's attempt to destroy him, the Kyouryu Greeed finds himself fighting OOO in his Tajador Combo as they take their fight into Medal Vessel. Dealt the deathblow as a black hole manifests on his chest, the Kyouryu Greeed delights in his demise as he collapses on himself.

However, Maki did not truly die, ironically. The pieces of his body, and possibly the sinister pieces of his mind that drove him to kill his sister and try to destroy the world, found their way to the future alongside the rest of the Cores and Cell Medals, and into the body of Michal Minato. Because of the Medals he was equipped with, Maki's body and mind formed a new Greeed around these Cores; Poseidon.

Kyoryu Greeed appears as a boss in the video game All Kamen Rider: Rider Generation 2. 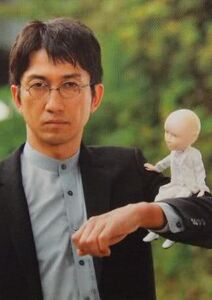 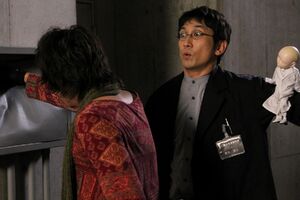 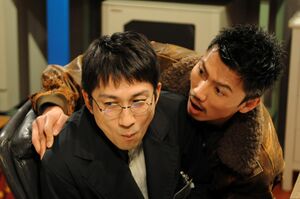 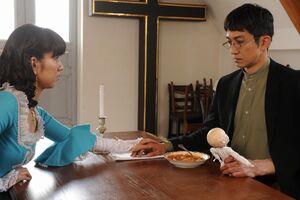 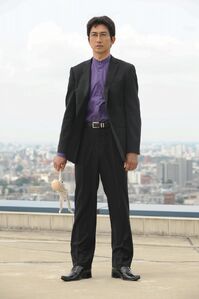 Dr. Maki discards Kiyo-chan as he begins the final stage of his plan. 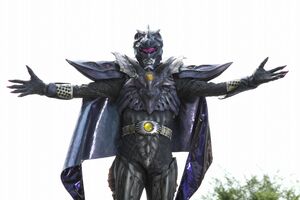 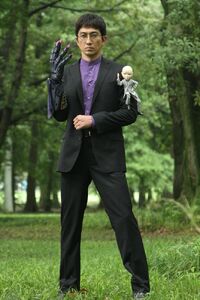 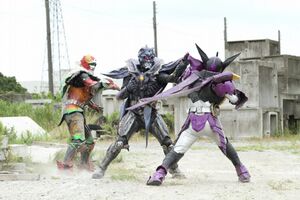 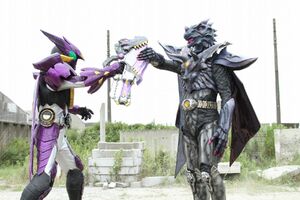 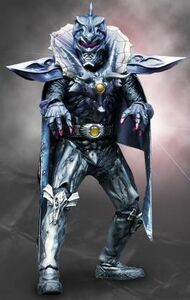 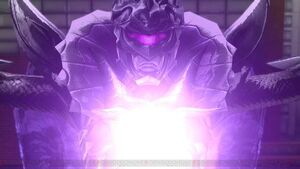