Villains Wiki
Register
Don't have an account?
Sign In
Advertisement
in: One Piece Villains, Comedy Villains, Fantasy Villains,
and 28 more

Get rid of the pirates.

Reckless use of devil fruit powers

He is voiced by the late Unshō Ishizuka (who also voiced Zabuza Momochi from Naruto and Heihachi Mishima from Tekken), and later by Ryōtarō Okiayu in Japanese (whom the latter also voiced Scar in the 2003 series of Fullmetal Alchemist) and Ray Hurd in English.

Kizaru is a very tall individual like the other Admirals (Aokiji, Akainu, Fujitora, and Ryokugyu). He is a middle-aged man with short black wavy hair, thin beard, and slanted dark-colored eyes. Kizaru wears orange sunglasses and has a relaxed demeanor. He wears a teal shirt with a lilac tie underneath his vertically striped yellow suit, a white Marine cape, and white shoes.

Kizaru is one of the most relaxed and mellow character in One Piece, calm and comfortable in extreme situations like the havoc at Saboady Archipelago and the Marineford War, often providing levity with his sarcasm and verbal ticks. He even volunteered to head to Wano Country to deal with Big Mom and Kaido despite the cautions of even Akainu and while the Reverie was currently being held requiring many high ranking marines as bodyguards to the kings and elites of the various allied nations.

Kizaru has a unique speech pattern, being extremely relaxed but often with a sarcastic tone which suits his unconcerned personality; methodical and slow drawing out sometimes multiple "oh"s at the beginning of sentences and ending some of them with a prolonged "ne", something which translators often denote in the vein of a rhetorical question.

Kizaru's relaxed demeanor can at times overflow into being outright absentminded even on missions on behalf of the Celestial Dragons. He went to Sabaody to simply kill some time, and believed that it would be a relaxing break from his work as an admiral. While there he demonstrated that he lacked the discipline to use the force of his powers to a safe degree uprooting mangrove trees and causing massive devastation and was apparently uncaring to any inconvenience to the locals or even civilian casualties in his arrest of a single pirate crew and only casually admitting that destroying most of the land was excessive.

Kizaru can also be a bit clueless and unobservant, as he would politely ask pirates about the whereabouts of his nephew, Sentomaru, even though he was using a black den den mushi (which is for intercepting calls) even trying to answer it when his nephew was calling him on the regular one on the admiral's person.

These tendencies are a strange contrast to his Devil Fruit powers which allows him speed superior to all others seen in the series at literally the speed of light, but on the other hand seem to work into a pseudo pun on him taking everything Lightly.

Kizaru's relaxed disposition and sarcasm can lead way to him sounding as if he does not take his own surroundings seriously and not taking legitimate threats into account at times leaving openings for enemies to take advantage of such as Whitebeard and Marco did during the war. Furthermore he seems to be very much unafraid of even the Yonko, volunteering to personally head off and stop a potential alliance or confrontation between Big Mom and Kaido and disrespected Whitebeard for his age and faith in a rookie pirate such a Luffy.

Should an enemy prove particularly meddlesome or annoying to Kizaru than he will react in kind by showcasing the vast difference in power and skill by toying and dominating his opponent as if to humiliate them and show their helplessness as he did with Monkey D. Luffy, via hindering as opposed to using the same brand of excessive force like he did at Sabaody. Unlike most of the Straw Hat captain's enemies Kizaru thinks of the pirate as trash and does not respect him for his strength of character or believe that he could be a dangerous threat for his heritage as the son of the Revolutionary Dragon. However after Luffy used Haoshoku Haki Kizaru began to see that he could be a legitimate threat is left unchecked and decided to bring him to justice alongside the other admirals. Nevertheless he was also the only admiral to acknowledge that they would need to leave Luffy be at the moment should he have escaped his attack and succeeded in escaping.

In his past under Zephyr, Kizaru has a greatest respect for his former mentor only being warned for relying on his devil fruit powers too much. In the present for One Piece: Film Z, Kizaru still maintained his respect for Zephyr. In the final battle, Kizaru has no qualms to kill his mentor.

While he sarcastically comments on the powers of others as being "scary" Kizaru is quite fearless and lacks a sense of caution causing him to be the most reckless of the three admirals rivaled only by Akainu when his tunnel vision locks on a single target at the detriment to all else around him. Kizaru can also be rather cold-hearted and apathetic towards his enemies: while never outfight sadistic Kizaru can and frequently is vicious and merciless, as he wanted to finish off Little Oars Jr. in the Marineford War. Furthermore Kizaru is also heavily authoritative and reliant on the power of the Light Light Fruit which allows him to become light itself and move his physical body at light speed.

Kizura doesn't hold an authority to relief former pirates of their bounties such as he cannot forget or remove Rayleigh's bounty when pirates committed crimes especially from the Roger Pirates.

However Kizaru is not above showcasing actual leadership qualities and contrasting the other admirals has advised those beneath him of factors to be wary of such as telling the Giant Squad to be careful of potential attacks from the sky, and was capable of orchestrating a plan with Onigumo to briefly neutralize Marco during the war. He also seems to be able to respect those beneath him to a degree and is just as relaxed with those of equivalent rank as he is to most people.

Kizaru's take on justice is described by the author as "unclear justice" which was on a banner in his office during his time as a vice admiral. While he seems to be neutral to absolute Justice Kizaru is vicious and merciless in capturing and executing enemies of the World Government. He enjoys his job as a Marine Admiral and dislikes pirates including the Shichibukai (who he sees as nothing more than pirates and distrusted them despite working for the World Government). Unlike Akainu and Sengoku however he is moderately strict and stern on the ideology of Absolute Justice and only sees it necessary to capture known enemies of the World Government like Silver Rayleigh and Monkey D. Luffy. Kizaru reveal bounties cannot simply be forgotten or remove when pirates committed crimes against the World Government especially the Roger Pirates.

At the age of twenty-six, Kizaru along with Akainu joined the Marines to train and become stronger.

After hearing about the Sun Pirates rampage on the seas, Kizaru was on a mission to capture the remaining pirates. Kizaru eventually captured Arlong after a quick skirmish. He then interrogates Arlong at G-2 and took him to Impel Down.

Kizaru was first seen responding to a call about the Celestial Dragons. He quickly arrives at Saboady Archipelago along with the Navy to capture the Straw Hat crew who were responsible for attacking the Celestial Dragons. While he was there, he could not find his nephew Sentomaru and even tried to ask some pirates where he could be. However, Kizaru and a Pacifista ended up fighting a couple Supernovas such as X Drake, Basil Hawkins, Urouge, and Scratchman Apoo. After defeating the Supernovas, he finally found the Straw Hat crew and Sentomaru. He first attempted to kill Roronoa Zoro but instead turned his attention to fighting Silver Rayliegh. Before Kizaru could do anything to the Straw Hat crew, Bartholomew Kuma appeared and teleported all of them away from him.

Kizaru was present at Marineford along with the World Government forces where they were going to publicly execute Portgas D. Ace (the son of the Gol D. Roger). They were waiting for Whitebeard who was going to rescue Ace from execution. After Whitebeard and his allies appeared and the war erupted, Kizaru entered the battle and fought Marco (Whitebeard's first division commander). When Luffy arrived during the war, Kizaru made many attempts to stop him and destroy Whitebeard forces. Later on, Kizaru alongside Aokiji and Akainu attempted to stop the Whitebeard pirates movement toward the execution tower wear Ace was being held. He then fought Luffy for a little bit and easily defeated him but got into a skirmish with Whitebeard. Kizaru later attacked Marco for being off-guard and destroyed the key that Luffy tried to use to release Ace but Galdino released Ace. After Ace's and Whitebeard's death, Kizaru along with Aokiji and Akainu attempted to kill Luffy but the effort was nullified by the arrival of the Red Hair Pirates. Shanks later told everyone that the war was over and Sengoku ordered the Marines to end the fighting.

After the Marines intercepted a communication between Big Mom and Kaido, Kizaru asked if he should go to handle the situation. Sakazuki told him to wait since they did not know the strength of the forces at Wano Country.

As one of the Marine Admirals, Kizaru is considered a very formidable opponent and incredibly powerful individual as his arrival to Saboady Archipelago frightened hundreds of pirates including the infamous Supernovas.

Kizaru ate the Logia type Pika Pika no Mi (Glint-Glint Fruit) which granted him the ability to turn into light and make weapons out of light which move extremely fast. He can even fire concentrated lights like bullets. Kizaru can use his Devil Fruit abilities to avoid attacks, create weapons, cause explosions, and travel at the speed of light or even faster when he is not lazy like when he did against Basil Hawkins. The only way to hit Kizaru is by using Haki or using powerful air vibrations like what Apoo Scratchman did to land a blow on him.

Like all of the Admirals, Kizaru is capable of using Haki in combat such as Busoshoku Haki to defend against Whitebeard's powerful attack during the Marineford War. 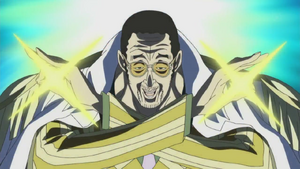 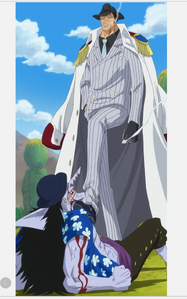