Taking care of her sister.

Hanging out with her sister.

Get Joe Darke executed for the crimes of the SL-9 Incident by using forged evidence.

Save her sister (both succeeded).
Be found guilty for the murder of Bruce Goodman (failed).

Admiral of the Zanscare Empire

Kizo Dogatie is the main antagonist of the manga Mobile Suit Crossbone Gundam Ghost. He is the admiral of the Zanscare Empire and is the son of Crux Dogatie. Impressed by the lethalness of the space pathogen Angel's Call, he desired to obtain it and use it to help him in taking over Zanscare Empire with his wife Maria El Tomoe.

A power hungry person, Kizo is willing to do everything to become the ruler of Zanscare Empire, and has no problem in using Angel's Call, a space pathogen that is capable of dissolving every people infected by it, which even disturbed Fonse Kagatie. He is also a mastermind, even expecting the betrayal of Thoucus. Being very ruthless, Kizo has no problem in infecting underlings that have failed him as a punishment, calling them as useless. Unlike his father, Kizo doesn't have a hatred towards Earth, but still desired to spread Angel's Call on it in order to exterminate all of the Earthnoids, since he see them as inferior. He is even willing to have children beheaded in order to force Font to give up the information of Angel's Call.

Kizo is the son of Crux Dogatie, the leader of the Jupiter Empire. He was risen by Fonse Kagatie and Karas, however, he was able to tell that Cruz simply sent Karas to see if he is useful in invading Earth or not. As a result, Kizo hated Crux. Eventually, Crux was killed during the battle between Jupiter Empire and Crossbone Vanguard, much to Kizo's joy.

After the reform ofthe Jupiter Empire into the Jupiter Republic, Kizo became the admiral of the Zanscare Empire, even though he was very uncontrollable.

At some point, Kizo became aware of the existence of Angel's Call, and he had a Zanscare ship to be used as a bait and had them to talk with the Thoucus's leader, Quo Gray. During the meeting, they were attacked by the League Miltaire and Serpiente Tacon, which Kizo admitted to the captain of the ship that he is the one who leaked their position to them. Kizo then allowed the Thoucus to fight them and the force of the Zanscare ship in order to prove if Quo Gray and his Thoucus was worthy or not. In the end, Kizo is satisfied, and he hired the Thoucus. He also left the decapitated head of Curtis' friend to the Serpiente Tacon, in order to show them what would happen if they stop them.

Eventually, in order to force Font and Belle to give up the location of the Angel's Call, Kizo threatened that he would have some captured children in the Space Colony "Cartoon Meat" executed after he had the Thoucus to take over it. Even though Jack Friday, a member of Thoucus, hid the children first and Font helped them escape with the stolen Mobile Suit Phantom, they were still captured by Kizo's Zanscare force again, together with Belle while Font was easily defeated by Gordon. However, just before Kizo was able to have a child executed, the Serpiente Tacon intervened and Font was able to overwhelm Gordon and his Galahad. Thus, Font and Belle escaped while Serpiente Tacon captured a remorseful Jack Friday.

Soon, Kizo found out that Erin Schneider, whose ship has some samples of Angel's Call, landed on Jaburo. Thus, he, piloting the Mobile Armour Bikaru, battled Font, Jack, and Curtis, since they wanted to destroy the Angel's Call due to its dangerous nature. However, unknown to Kizo, Erin was infected by Angel's Call. Only surviving due to being in some kind of fluid, Erin intended to use the Mobile Suit Engines in the river of Jaburo to generate heat to destroy the virus. Kizo then sent some Zanscare soldiers to Erin's ship to obtain the Angel's Call, only for them to be infected and dissolved in just forty-three seconds. After seeing how lethal Angel's Call is, Kizo was overjoyed at its lethal effects, so he kidnapped Erin and fled in Bikaru's escape pod just before Erin's ship was able to generate heat.

Kizo then went to a town where his wife Maria lives in. The Serpiente Tacon was able to capture Maria and threatened her to reveal the location of Erin and the Angel's Call, only for Maria to lure to the room where Kizo was located after teasing them. Kizo then stabbed Erin with a blade, releasing the Angel's Call while he and Maria escaped as an attempt to have the Serpiente Tacon killed after Quo revealed that he betrayed Kizo in order to obtain the Angel's Call to sell it. After Kizo and Maria escaped, Fonse gave them the final warning, telling them to give up using Angel's Call due to its uncontrollable nature, only for Kizo to tell Fonse that he was blinded by Maria Pia Armonia. Having no choice, Fonse launched a nuke to destroy the Angel's Call. However, it was destroyed when the room Kizo was in earlier overheated due to a program installed by Font.

Despite this, Kizo still manage to obtain some Angel's Call, and would install them into bullets. In the transformable Mobile Armor/ship Chaosrel, he told his men that they would overthrow the Zanscare Empire to form the El Zanscare Empire instead, at the same time, he also told his assistant that he was fully aware of him being a spy sent by Fonse, but told him not to worry about it. Kizo then launched out in his Mobile Suit Midas to battle the Zanscare force, with the Midas Torch Force attack, he disabled the incoming enemy Mobile Suit by hijacking it with computer virus while letting Maria El Tomoe, piloting the Chaosrel, to use the Gimlet Bits to control the enemy Mobile Suits and inject Angel's Call into the cockpit, killing their pilots. Soon, after hijacking and infecting serval Zanscare Mobile Suits, Kizo returned to the Chaosrel and confronted his horrified assistant. His assistant called Kizo out for being insane after learning that Kizo was willing to destroy humanity, only for him to tell his assistant that he had found it out to late just before he injected Angel's Call into his assistant, killing him and infecting the entire bridge crew. Kizo then left while laughing about how he loved traitors since he enjoyed killing them. Kizo also ordered his men to kill everyone who isn't a member of Golden Egg.

Eventually, Kizo and his force would be attacked by the Thoucus, since Quo Gray wanted to obtain the Angel's Call and sold it for profit. Kizo attempted to infect Quo, however Quo expected this and wore body armor. Quo then battled Kizo in his Grego Mobile Suit. At first, with his Grego, Quo was able to have the upper hand against the Midas, forcing it to kneel down. However, Kizo then used the Midas Torch Force, disabling the Grego together with many other Mobile Suits that were present during the battle. Kizo then tried to infect Quo again, but Quo survived and fired his bazooka to destroy Midas' eye while the Midas sliced the Grego apart, killing Quo. With its eye destroyed, Kizo is no longer able to use its Midas Torch Force, and was attacked by Curtis in his Crossbone Gundam X-0. Curtis was able to buy some times long enough for the Solar Ray to fire, incinerating all Angel's Call infected Mobile Suits and battleships instantly. Despite this huge loss, Kizo still refuse to give up, and destroyed X-0 while Curtis ejected in his escape pod, with The Serpiente Tacon retreating soon after. The Manzana Flor, the ship of Serpiente Tacon, rammed into Chaosrel, sending them into the Sun, only for Kizo to enter the ship and changed its route into ramming into Angel Halo while kidnapping Belle.

With most of its members being unable to fight, only Font, Jack, and Kosher were able to stop Kizo and Maria. Font and Jack battled Kizo while Kosher, piloting a Divinidad, battled Maria. Kosher successfully defeated Maria, but at the cost of her own life. As for Font and Jack, they were at first unable to damage the Midas, but Font got lost in logic, and Jack was defeated and was seemingly killed. Believing his friend was killed, Font came back to his senses and was finally able to punch through the Midas's Beam Cape by reflecting it back to the Midas. The Phantom Gundam and Midas then sliced each other's cockpit. While Font and Belle survived, since the Phantom Gundam's cockpit is filled with jelly-like fluid, Kizo was mortally wounded and succumbed to his injuries. After seeing her husband's death, Maria also committed suicide by infecting her crew and herself with Angel's Call. Then, with the Angel's Call filled ships heading towards the Sun, Kizo's plan was finally stopped and humanity are saved for good. 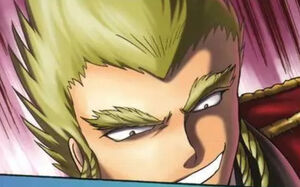 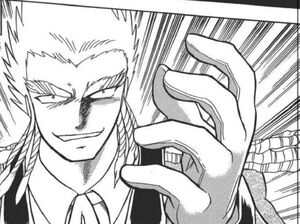 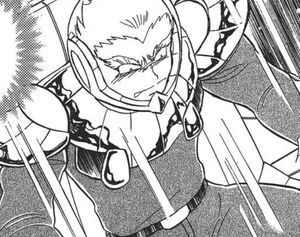 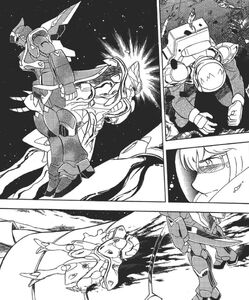