Footmen of the Throne

Servants of the Royal House of Gadgetry

Affiliates of the Machine Empire

Coming up with plans to destroy the Rangers.

Klank and Orbus are the right hands to the Royal House of Gadgetry and a supporting antagonist in Power Rangers Zeo. While Klank is a humanoid robot, Orbus is a module that joins with him.

Klank is the butler type character resembling a humanoid robot who serves King Mondo and the Machine Empire. He is forced to pander Prince Sprocket although this irritates him no end. As a robot, he is very loyal to his King and plays a major role in helping him battle the Zeo Rangers. Klank is the dignified and very proper servant to King Mondo and his immediate household.

He is a faithful servant who takes his job to heart and performs his duties quite flawlessly - even when that means pandering to Prince Sprocket, who he absolutely despises. The dedicated Klank is sworn to uphold the principals of the Machine Empire - namely evil, destruction, and universal domination.

Orbus is the robot sidekick to Klank resembling a cute-looking module. Although he is small, he has the power to make the monsters in the Machine Empire grow to huge heights. The high-pitched robot works close to Klank making monsters to defeat the Zeo Rangers. Orbus may look like a small stack of scrap metal, but her provides an invaluable service to King Mondo's Machine Empire.

He is endowed with the power to make all those evil mechanical monsters grow to many, many times their normal size. This ability makes him a very dangerous adversary.

Klank and Orbus came to the Moon along with the Machine Empire after King Mondo decided to invade the Earth. Though they were fiercely loyal to their masters, they never joined physical battles and were often kicked around. Klank was quite pompous and thought highly of himself and Orbus was used to enlarge the Machine Empire's monsters.

When the King wanted to have his machine monsters grown to Megazord size, Klank was given an upgrade to allow him flexibility to swing Orbus around until he built enough momentum to toss her at the monster in need of enlarging. Klank would swing her at the monsters and she would make them grow. Klank also had a thick Scottish accent while Orbus had a very high pitched voice.

Klank would come up with a plan to defeat the Zeo Rangers or take over Earth, only for Sprocket to immediately take credit for it. Whenever he tried to insist that the plan was his idea, his master would immediately silence him. Once the plan failed, however, Sprocket and Mondo would then quickly blame Klank for coming up with it

The pair also attended the United Alliance of Evil's meeting on the Cimmerian Planet and took part in Dark Specter's enormous assault on the universe, but they weren't seen when Zordon's energy wave struck so whether they survived is unknown. 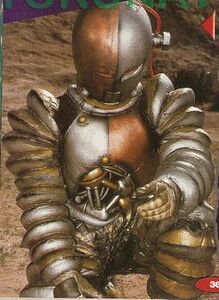 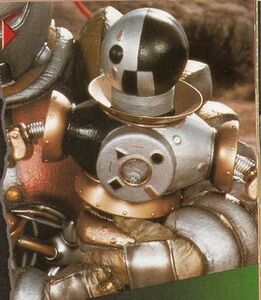 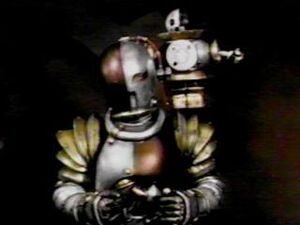 Retrieved from "https://villains.fandom.com/wiki/Klank_and_Orbus?oldid=4127866"
Community content is available under CC-BY-SA unless otherwise noted.