Keep the flag of South Park.

Spread their ideal of... Whatever.

The Klansmen are a small group of fictional Ku Klux Klan members native to the equally fictional town of South Park - they are often depicted as rather unintimidating (unlike their real-world counterparts) but are almost universally hated and shunned by everyone in the town due to their racist beliefs.

KKK is first mentioned in episode Pinkeye. Principal Victoria noticed Cartman dressed as Adolf Hitler. To rectify this, she tried to dress him as a ghost, but he ends up virtually looking like a member of KKK. When the boys went trick or treating, they received only one piece of candy as a result of the costume.

In episode Chef Goes Nanners in which Klansmen make their full appearance, the debate as to whether the South Park flag should be changed because of its depictions was heating up. Because of depictions representing the flag of South Park, the KKK agents support the argument that the flag should not be changed. The group is shown holding a meeting in a forest. Jimbo Kern and Ned Gerblansky infiltrate the organization, and in a successful attempt convinced them to change their argument. Their reasoning is that because of the majority of the voters are against the KKK's ideologies, they will also change their votes. After Jimbo and Ned exit the meeting, the group conducts a series of party games and other silly activities.

In Here Comes the Neighborhood, Token Black puts in a successful advertisement in Forbes magazine to wealthier residents to South Park. Upset at the potential consequences the sudden influx of wealth will have on South Park, Mr. Garrison and the other men of South Park lead a rally to drive the wealthy residents away. At the rally, the men dress as ghosts, in order to make the town appear haunted. The wealthy celebrities mistake their costumes for KKK members and leave the town thinking it is hateful and xenophobic.

One notable episode that involved the Klansmen as minor antagonists was when Chef objected to the racist town flag that depicted a lynching of an African American - the Klansmen were convinced to vote for the elimination of the flag as everyone else would vote against the elimination out of the fact nobody likes them (thus, in a clever (if immoral) twist they would succeed in their actual goal of keeping the flag and its racist message). 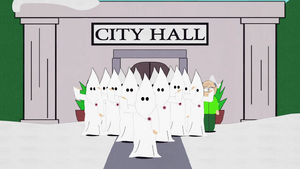 Retrieved from "https://villains.fandom.com/wiki/Klansmen_(South_Park)?oldid=3518513"
Community content is available under CC-BY-SA unless otherwise noted.