Transfer his mind to a human body.

Klaus Heissler is a major character in American Dad!. He is a German Olympic skier's brain transplanted into in the body of a goldfish with CIA technology, who is now forced to be the pet to The Smith Family. He is villainous for being a Nazi sympathizer, an overt pervert who tries to steal Francine away from Stan, and a manipulative troll who causes other family members to turn against each other and/or make fools of themselves for his own amusement.

Klaus Heissler was once an East German Olympic ski-jumper until his brainwaves were switched with that of a goldfish in the 1986 Winter Olympics by the CIA to prevent him from winning the gold medal. It is unknown about the final fate of his original body, although it is presumed it might have expired (Klaus' original human body may have gone underwater and the goldfish brain was unaware that a human body needs air.) However, as for Klaus himself, he took up residency with the Smith family , where the CIA ordered Stan to have Klaus pose as their pet, a fact Klaus has still apparently not come to terms with.

He lusts after Stan Smith's wife Francine; she is the subject of many of his sexual fantasies, which revolve around sadism, except for one where he acquired a robotic body to save the city of Atlantis, and Francine was impressed with Klaus, at which point, she then turned into a mermaid.

Klaus' mind has apparently enhanced the physiology of his goldfish body in addition to the ability to talk. Klaus is apparently able to breathe just fine as long as part of his body is submerged in water, which is often shown when he drags himself along the floor in a shallow water dish. He may actually have the ability to survive in any type of liquid, since he once hid in a thermos filled with coffee, was frozen in his fishbowl when Karl Rove passed by, was congealed in jello when dared by Hayley Smith , survived being put in a freezer by Stan, in Brains, Brains and Automobiles by filling his bowl with vodka, and was put in a washing machine so Klaus could surround himself with Francine's underwear. Ordinary goldfishes will immediately die if placed in any liquid other than water, or superheated water such as that found in a washing machine.One possible reason for this endurance was that he was previously a human.

In Finances With Wolves, Klaus managed to temporarily become human when he switched his goldfish body for that of a black man's (the front man for an Earth, Wind and Fire cover group who tried to rip off the CIA at their summer mixer), and almost ran off with Francine, but the body was mortally damaged in the aftermath of an explosion at the mall. Deciding to spare his life, but also to make sure he never try to seduce Francine again, Stan transferred Klaus' brainwaves into another goldfish's body (Klaus flushed the previous fish's lifeless body down the toilet). This episode also gave an indication of his personality—while Stan dove to save Francine from the blast, Klaus was more concerned in saving his new human body, which indicated that Stan was the one who cared more about Francine than did Klaus. This effect has continued into the following season, where Klaus' obsession with Francine has largely tapered off, which could be that Klaus is indeed grateful to Stan for saving his life.

His voice is modeled after Peter Lorre's.

Klaus has a strange obsession with the Disney movie Beauty and the Beast. His view is that without Mrs. Potts (whom Francine played in "Stan of Arabia"), the Beast would have killed himself years ago. This may also be interpreted as simply part of his obsession with Francine.

In "Of Ice and Men" he is shown in the year 2045, inexplicably he once again has a human body. Klaus has apparently been human again for quite some time, and married to an unnamed woman for many years, as he has fathered at least one child who has lived long enough to grow up and have a child of his or her own, thus meaning Klaus has a grandson in this future. It was unspecified whether Klaus will be the maternal or paternal grandfather of that little boy. The majority of the episode consisted of a story Klaus told his grandson about the past.

He also claims to have had his brain inhabit two sharks and a monkey, but this cannot be confirmed as true, as Klaus seemed to be sarcastic, and in a tone of voice that is ordering his grandson to be quiet and go to bed.

Klaus is also a fan of the TV show Scrubs. Klaus has shown the Smith family his musical talent by playing Hava Nagila on champagne flutes.

He gets on fairly well with Roger most likely due to the fact they are both technically "outsiders" in the family but their relationship is a sort of sibling rivalry. In other words Klaus will do things that get Roger in to trouble for his amusement, like when he tricked him in to eating Francine's potato salad in Deacon Stan, Jesus Man. When a horrified Roger asked why Klaus would do something like that he just laughed and said "I'm German, it's what we do". He also has a good relationship with the children for the most part and acts like an older brother figure to them that leads to humorous situations. Best examples include getting locked in a closet with Steve after reading Hayley's diary, and entering a game of Dare or Dare which he absolutely enjoyed.

His time as a fish also seems to have driven him partially if not completely insane has he sometimes is prone to bouts of maniacal laughter and his frequent delusions are not a good sign either. Klaus is also paranoid of China thinking they're going to take over the world. Roger and Steve once agreed with one another that Klaus was insane when they thought he poisoned Roger's chocolates has revenge for a prank and looked over at Klaus who watching them from his bowl singing to himself with an evil glint in his eye (see Surro-Gate).

Klaus Heissler is an orange goldfish in a clear fishbowl filled with blue water.

Klaus Heissler is a wannabe supervillain, who is unable to do any real harm because he's restrained by his powerless fish body. However, this does not stop him from manipulating family members into doing stupid, embarrassing, or self-destructive things as ways of tormenting them. He is in love with Francine and acts extremely perverted over her and wants nothing more than to steal her from Stan. Klaus is often mistreated by the Smiths (especially Roger), making him a very lonely person with very little to do in life, with him being forced to live in a fishbowl for the rest of his days with nobody to talk to except for passing family members, who give him very little attention and most of the time they do give him attention, they're very rude to him and put him down. However, in recent seasons, the family has been a lot nicer to Klaus and they've treated him as more of an equal, giving him a happier and more satisfying life. 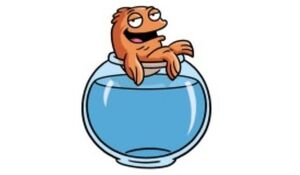 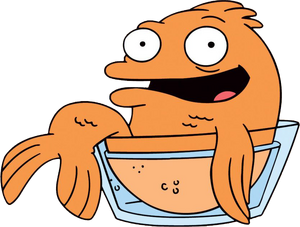 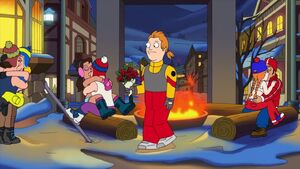 Klaus in his human body. 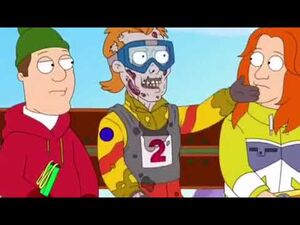 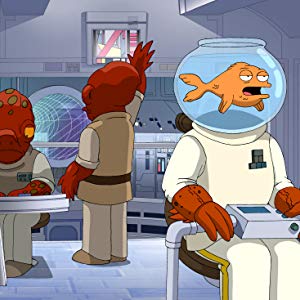 Klaus in a Star Wars parody episode on Family Guy. 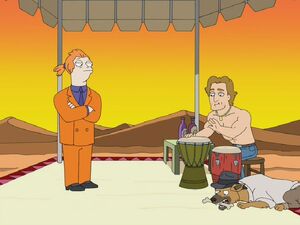 Klaus as Tchotchke Schmear in Tearjerker. 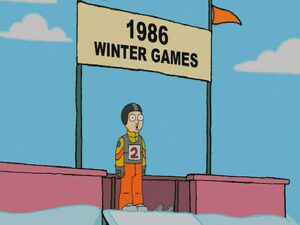 Klaus as a human. 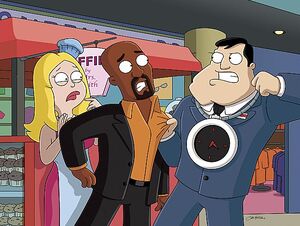 Klaus in his body getting threatened by Stan. 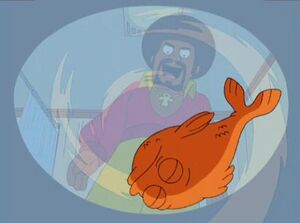 Klaus after getting his own body.