Giant Robot
The Brainwave Machine, later turned into Kling Klong, is an antagonist from the 2011 puzzle platforming video game LittleBigPlanet 2. It was a mechanical construct built by Victoria von Bathysphere to make Sackbots, but was later brought to life corrupted by the Negativitron to turn on the Alliance.

Victoria built the Brainwave Machine to create Sackbots, but it was hijacked, brought to life, and corrupted by the Negativitron to create Meanies instead. Sackboy and Larry Da Vinci arrive to help, fighting their way through the gardens and labs to get to the machine and stop it from making any more Meanies. Sackboy makes it and flips the switch, turning the machine off.

However, the Negativitron arrives, and uses its negative power to restore life to the machine and reactivate it, this time giving it weapons and four giant mechanical legs, turning it into "Kling Klong". It begins scaling the tower and destroying, and Sackboy goes to stop it.

On the first floor of the tower, Kling Klong attacks Sackboy by electrically charging the ground, sending waves of lethal electricity his way. Sackboy must jump over the pulses and use the Grabinators to throw cakes into the machine's bubble brains. After hitting three brains, Kling Klong will ascend to the next floor. On the second floor, Kling Klong will fire plasma jam projectiles to disintegrate Sackboy, with Sackboy having to run in between the arcs in the projectiles' trail to avoid death. Sackboy throws three more cakes, causing Kling Klong to head up to the third and final floor, where it attacks with an electrical laser beam. Sackboy must throw three more cakes, this time with the assistance of bounce pads to escape the laser beam.

After destroying all of the bubble brains, Kling Kling will fall apart and fall off the tower to its death, exploding on the ground. 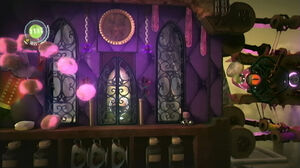 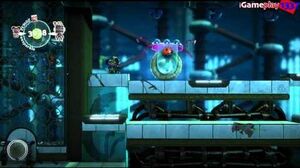 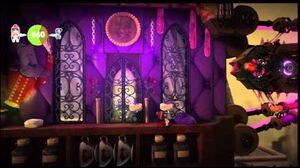 Retrieved from "https://villains.fandom.com/wiki/Kling_Klong?oldid=3890273"
Community content is available under CC-BY-SA unless otherwise noted.