Confess his crimes in his last will so that the real truth comes out (succeeded posthumously after seven years).

Klint van Zieks is the posthumous overarching antagonist of The Great Ace Attorney 2: Resolve. He was the older brother of Barok van Zieks who was blackmailed by Mael Stronghart into villainy as The Professor.

Klint van Zieks was born in the van Zieks family in the late 19th century. He wanted equal treatment under the law and ended up quickly rising to prominence as a prosecutor. However, no matter how hard he tried to change the legal system, the criminals continued to escape using the resources they had at their disposal. This ended up leading him to become a criminal himself as he ended up killing a corrupt member of Parliament's House of Lords by killed by having a great hound rip out his throat.

After his first murder, Mael Stronghart figured out that he was the culprit and decided to blackmail him, threatening to reveal the truth behind his murder to his family. With no option left for him, he decided to listen to him and ended up committing three more murders, including that of the lord chief justice so that Stronghart could take his position.

Six months after, he was confronted by his partner Genshin Asogi, who had figured out that he was the one responsible for The Professor's murders. He then decides to duel with him, but only with two conditions. The condition is that he is allowed to write his last will confessing his crimes so that Genshin could protect his pregnant wife. With Asogi agreeing to his conditions he then confessed his crimes to his wife before writing his last will. The dual ends with Genshin stabbing him in the heart, and this ended up leading to his arrest for Klint's murder, and at the same time, Stronghart falsely pinned The Professor's murders on him which leads to a close trial.

His death has deeply affected his younger brother as he spends his time admiring his brother, not knowing the real truth, and at the same time wearing his badge at all times to remember him. 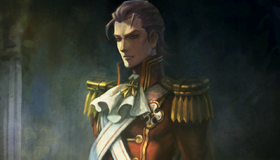 A portrait of Klint van Zieks. 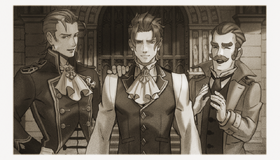 A picture of him alongside Tobias Gregson congratulating his younger brother, Barok van Zieks. 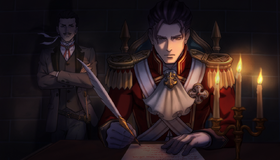 Klint writing his will before dualing with Genshin Asogi.