Ruler of The Neverhood (formerly)

Self-proclaimed king of all SkullMonkeys (formerly)

Stop Klayman from ending his rule over The Neverhood
Kill Klayman and build his Evil Engine No. 9 to destroy The Neverhood (both failed)

He is the first son of Hogborg; creator of a world called The Neverhood, and desired Hoborg’s crown and control over the world out of childish greed. However, after Klogg wore the crown, his appearance changed and he became more twisted and malevolent.

He was voiced by Doug TenNapel.

Klogg is nothing but a greedy power hungry tyrant. He has no care for anything other than himself and his own greed, he is a narcissist, talking about only himself positively and his greatness. He is very intelligent knowing how to create stuff and having genius traps. Despite this, he is played for humor since his voice is very humorous and being a comic relief. After his death, a whole song was made of his death to celebrate meaning that people outright loathe him.

Klogg's former appearance resembles that of game’s protagonist Klayman, albeit has one white sphere on his chest and a maroon midsection.

After he placed the crown on his head, Klogg transforms into a dull red creature with white teeth and claws. His eyes were discolored into white (on the right) and brown (on the left), a single spike can be seen on the top of his head, and has an unibrow set above his eyes. He seems to wear a brown ragged cloak with the neckline white, and has red legs with white feet and red toes.

Klogg was the first son of Hoborg and originally looked much like Klayman, but due to Hoborg's eagerness, he was born without care outside of the nursery. When Hoborg introduced Klogg to the Neverhood, he told him that he could have anything the world had to offer. However, the only thing Klogg focused on was Hoborg's crown. Klogg tried to grab it but Hoborg evaded him and explained the crown is the only thing he couldn't have. Despite the warning, Klogg eventually managed to swipe the crown off Hoborg's head and placed it on his own, becoming the new ruler of the Neverhood and transforming into a beastly looking version of himself. Afterwards, Klogg discovered that without his crown, Hoborg had drifted into a deep sleep.

With the Neverhood under his rule, Klogg chained down parts of the world so that the castle was blocked off to outsiders. However, Klayman pulled the pin holding the chain in place, allowing him and his allies Bil and Willie access to the castle. Klogg attempted to stop them and managed to shoot Bil with a cannon, but Klayman made it into the castle just in time. Klogg then confronted Klayman in the throne room and tried to convince him to wear Hoborg's crown, claiming that the Neverhood would be his to rule if he does.

In the bad ending, Klayman accepts, puts on the crown and, like Klogg before him, transformed into a monster. Klogg cackled with glee as he believed to be victorious, but Klayman knocked him unconscious before declaring the world was now under his rule.

In the good ending, Klayman takes the crown and used it to restore Hoborg back to life. Infuriated, Klogg charges at the two with a jagged dagger, but accidentally stepped on his remote that controlled the cannon and shot himself off the edge of the Neverhood.

In SkullMonkeys, Klogg landed on the Planet Idznak where he accidentally killed one of the Skullmonkeys, whose corpse he used to disguise himself as Kloggmonkey. He then convinces the Skullmonkeys to help him build a machine called Evil Engine Number 9 and help him destroy the Neverhood. However, one Skullmonkey, Jerry-O, sent a flying machine to retrieve Klayman and soon informed him of Klogg’s plot. Although Klogg did eventually completed his Evil Engine, Klayman arrived just in time to stop him from activating it. Klogg fought Klayman using a machine that shot dangerous projectiles, but failed to defeat him and was killed. 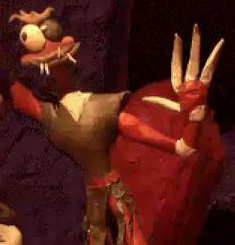 Klaymen becomes The new Klogg as the original one is now presumed dead. 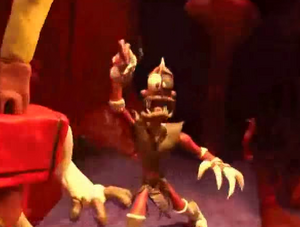 Klogg's true defeat.
Add a photo to this gallery

Retrieved from "https://villains.fandom.com/wiki/Klogg?oldid=3904596"
Community content is available under CC-BY-SA unless otherwise noted.