Member of the Klu Klux Klan

Rid the "invaders" and kill as many people as possible for Malebolgia (succeeded for a while).

The unnamed Klu Klux Klan Member is a minor antagonist in the third season of Todd McFarlane's Spawn. He is a member of the Klu Klux Klan and taxi driver who kidnaps and murders people for his master, Malebolgia. He is the main antagonist of the episode "Sends in the KKKlowns".

Like any other Klu Klux Klan member, he shares supremacy, believing not only on eradicating any kinds of black-skinned people around the world, but also to be a loyal servant to Malebolgia. He seems to have a calm nature, despite being a murder who kidnaps and kills his victims.

Nothing is known about the member, but being a member of the Klu Klux Klan and possibly disguising himself as a taxi driver to kidnap people. At some point, he seems to aware of Malebolgia's exists, presumably was connected by the demon lord.

During at night, he is seen picking up a Jewish man in Brooklyn, New York and takes him to an unknown warehouse, hanging and killing the man. Thinking about "invaders" taking his land and property, along with thinking about his master, Malebolgia.

Later, he hijacks a married couple in an alley, who going to an airport, not realizing they were going to be murdered by the cab driver.

After calling Wanda and hanging out in the bar, Terry walks away and is followed by the cab driver in the shadows. While waiting out in the back, he is attacked by the man and tied up and brought to his warehouse. As Terry wakes up, he sees the hanged corpses that were murdered by the man. As the cab driver comes back to prepare to kill the man he kidnaps, only to have been escaped. Terry jumps out and attacked the man. As Spawn watches Terry leave the building, he goes and kills the kidnapper, ending his murders once and for all. 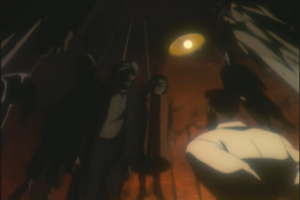 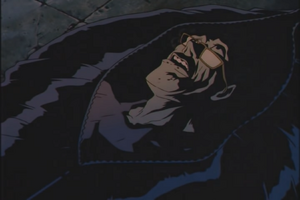 The man's corpse.
Add a photo to this gallery

Retrieved from "https://villains.fandom.com/wiki/Klu_Kux_Klan_Member?oldid=3705318"
Community content is available under CC-BY-SA unless otherwise noted.