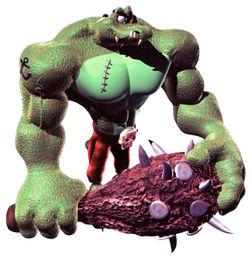 Klubba is doorman at Klubba's Kiosk in Donkey Kong Country 2: Diddy's Kong Quest. Kaptain K. Rool assigned him to protect the Toll Bridge where the only access to the Lost World, the core of Crocodile Isle, is located. Klubba doesn't like K. Rool too much, so he will let you pass if you pay him some Kremkoins. If you dare don't pay and choose to fight him, he will smack you away from the bridge and challenge you to come again.

Klubba will appear at Klubba's Kiosk guarding a toll bridge which leads to Lost World. However, Klubba will not let the Kongs pass unless they pay him with Kremkoins. The amount of Klubba's toll will increase every time Diddy and Dixie meet him at a different kiosk, but once he is payed they to don’t need to pay him again at that location to cross the bridge.

Klubba retains the role had in the previous game but his kiosk is only found on the Crocodile Isle map and the player will need to collect all Kremkoins to pass him.

Klubba is a large, green Kremling who has a very muscular upper body with a stitch on his chest, a anchor tattoo on his right shoulder and an eyepatch over his left eye. Aside from the forementioned eyepatch, Klubba also wears tatted red pants held up by a black belt with a white skull belt-buckle. For a weapon, Klubba wields a giant spiked club.

Klubba talks like a gruff, stereotypical pirate and tries to act intimidating in front of the Kongs. However, his attitude towards the heroes changes when he payed off with Kremkoins, treating the Kongs more friendly and basically giving them the "V.I.P. treatment" (at least until they reach the next Klubba's Kiosk).