Villains Wiki
Register
Don't have an account?
Sign In
Advertisement
in: Warlords, Evil from the Past, Animals,
and 43 more

Leader of the Pure Ones

Form a powerful army to command, the Pure Ones (succeeded).

Cleanse the owl race of all non-Tytos and become ruler of the owl world (failed).
Give birth to a hire to the Pure Ones' throne (halfway succeeded).

He is a barn owl, the first son and eldest child of Noctus and Marella, the older brother of Soren and Eglantine, the mate of Nyra, the father of Coryn, and the uncle of Bell, Blythe, and Sebastiana.

Kludd was born late one summer in the forest of Tyto to Noctus and Marella. Shortly after hatching, Kludd knew that he was born into the wrong family as they spoke of the blessings of peace and forbid talk of battle claws, much to Kludd's annoyance. One day when Kludd was a nestling, his parents and their nestmaid snake Mrs. Plithiver left him alone in the family hollow, and a group of battle claw equipped Barn Owls (among them a young female named Nyra, who was not much older than Kludd) from a group known as the Pure Ones stopped outside and told Kludd about parts of forests they had concurred and small rulers they had driven out or killed, which intrigued the young owl who wished to join them. However, it was decided by the Pure Ones' leader The High Tyto that Kludd could join once he learned to fly. Shortly after this meeting, Kludd's brother Soren was born.

Two weeks after Soren's birth, Kludd's sister Eglantine was born. At this point, Kludd had begun to learn to fly and had joined the Pure Ones. He had performed several tasks to join such as killing the nestmaid snake of another owl family and he later maimed another owl. The last task was to sacrifice a family member to which Kludd chose Soren, whom Kludd was jealous of. One night whilst Noctus and Marella were out hunting, Kludd pushed a now three-week-old Soren from their nest. Soren survived the fall, but Kludd believed that he would be eaten by a raccoon. However, unknown to Kludd, Soren was soon taken by owls from St. Aegolius Academy for Orphaned Owls.

Kludd was power-hungry and wanted to rule the Pure Ones, so he battled with their leader and killed him, although he paid a price, as a large portion of his face was ripped off. He then had a metal mask made for him to cover the scars, and became known as Metal Beak and took Nyra as his mate. Kludd later killed his parents and took Eglantine to be Stone Stunned (which involved sleeping in a crypt with human bones, resulting in lost identities) in the Pure Ones' castle.

In a later battle with Soren, who had survived and now lived at the Great Ga'Hoole Tree with the Guardians, Soren ripped off Kludd's mask and saw that he was his brother. Soren then melted part of his brother's mask off with a burning branch, which ended the battle and Kludd went off in search of water to cool it down.

When the Guardians launched an attack on St. Aegolius Academy, an evil organization that had previously captured Soren, Kludd was anticipating their assault and set up a trap for the Guardians. During the ensuing battle, he lured Soren to a cave, where he had six of his owls waiting to ambush him. Soren and his companions, however, escaped the trap and fought Kludd himself, but Soren could not bring himself to kill his own brother. It was until Kludd wounded Gylfie, Soren's best friend, that he tried to kill him, but another of his fellow warriors, a great grey owl named Twilight, came in and slew Kludd with a fatal blow to the back (to save Soren from having to kill his own brother). The Pure Ones were defeated, but Nyra survived and hatched her and Kludd's son named Nyroc (later known as Coryn).

After his death, Kludd's bones are gathered by Nyra for a final ceremony whilst his mask and battle claws were kept for Nyroc to inherit when he becomes the next king of the Pure Ones. Nyroc fled after failing his Special Ceremony to which Nyra warned him that the scroom (owl name for ghost) of his father would follow him. This proved true as Nyroc encountered images of Kludd in his mask who urged him to return to the Pure Ones. Eventually, Nyroc declared that he was only a mask and renounced being Kludd's son, before charging at the mask and shattering it, indicating that Kludd was finally in hagsmire (Hell)

Nyra later wore a mask made from the remains of Kludd's during the battle of the Middle Kingdom. The mask was left behind on three bloodstained owls but was later retrieved by Nyra who began wearing it as a tribute to her mate and hide the wounds caused by The Striga when he saved the chaw of chaws in the Battle of the Middle Kingdoms, having her face as badly mutilated as Kludd's.

Kludd is an "unusually large" Barn Owl with a mu-metal mask to cover his disfigured face and to also protect him from being affected by flecks.

Kludd started out as being an ignorant and rude young owl who didn't have a good relationship with his parents and siblings (who were unaware of his alliance with the Pure Ones until later). He was jealous of his brother Soren from the moment he hatched, knowing that he was better than him and was favored by their parents. The Pure Ones' influence on Kludd led him to try and kill Soren and later kill his parents and stone-stun Eglantine. He was also power-hungry and went as far as to kill the leader of the Pure Ones and replace him. Despite this, Kludd did hold love for his mate Nyra, who was the only one he truly cared about. 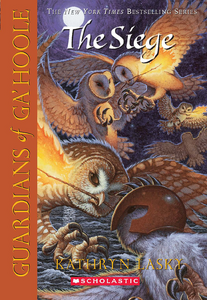 Metal Beak on the cover of The Siege 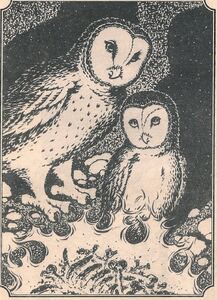