Minion With A Mission

Generating a forcefield around himself

Klungo is a major antagonist in the Banjo-Kazooie franchise. He is the scientist minion of Gruntilda who assists her in her schemes, before ultimately deciding to leave her.

Klungo started out as nothing but Gruntilda's lackey. After Gruntilda kidnapped Tooty, Banjo's little sister, Klungo created a device that could swap Tooty's beauty and Grunty's ugliness. If the gamer gets a game over, Klungo's machine becomes successful, Gruntilda acquires Tooty's beauty while Tooty acquired Gruntilda's ugliness. When Gruntilda is defeated by Banjo and Kazooie and was buried under a rock, Klungo tried his best to push the rock and has been pushing it until the next game.

Two months after Gruntilda's first defeat, Klungo created a mechanical version of Grunty; the Mecha-Grunty. After Grunty's soul was transferred into the Mecha-Grunty, managed to kidnap Kazooie, and travel back in time with Klungo in an attempt to rewrite history. Banjo and Kazooie encountered Klungo several times throughout the game, and every time Klungo gets more difficult to defeat. After Mecha-Grunty was destroyed by Banjo and Kazooie, Gruntilda's ghost was forced back into her old body in the present. She told Klungo to bring her sisters, Mingella and Blobbelda, to help her escape.

Two years after Gruntilda's defeat in Banjo Kazooie, Klungo is still trying to push the rock that's buried Gruntilda. He kept on pushing it until Gruntilda's sisters arrived and rescued their sister. Klungo appeared as a boss in the game.

After Grunty killed Bottles the mole and escaped, she left Klungo behind to hinder Banjo and Kazooie's progress. Klungo is one of the few bosses that Banjo and Kazooie must defeat in order to process further. Both of them fight Klungo three times, and each time he became more accurate at tossing harmful potions at the duo. In the first two boss battles, Klungo is fought in Digger Tunnels, while the third boss battle takes place at the entrance of Cauldron Keep.

Before the boss battles commence, Klungo drinks one of three random potions, each one grant Klungo a certain ability. The blue potion allows Klungo to multiply, with one more added for every hit (starts off with two, the three if Banjo hit the right Klungo and finally four if Banjo hits the right Klungo), the green potion allows Klungo partial invisibility as he sometimes becomes visible for a split second, and the red potion allows Klungo to grow in size. If Banjo hits him, Klungo will activate an indestructible shield and start throwing yellow potions. After being hit three times, Klungo is defeated and will retreat, begging Gruntilda to beat him with her Broomstick for his failure.

After Klungo is defeated for the third time, he questions his career and redeems himself, leaving Gruntilda's side.

Klungo also appeared as both a playable character and boss in the video game Banjo-Pilot.

Klungo had quit working for Gruntilda and decided to make video games instead. He opened his own arcade in Showdown Town where Banjo and Kazooie can play his game "Hero Klungo saves teh World". Klungo also hosts challenges in Nutty Acres, LOGBOX 370, Banjoland and Terrieam of Terror.

Klungo is a fairly strong minion of Gruntilda. He's incredibly intelligent as he was able to invent the machine that can swap the beauty and/or the ugliness. Klungo also invents a mechanical version of Gruntilda. He does have some strength but not enough to push a large boulder.

Klungo also uses four different potions when the fighting, each one with a different ability, however Klungo only drinks one of three potions before the boss fight, and throws the fourth potion. The red potions allow Klungo to grow in size. When he becomes the size of a giant, Klungo will mostly perform a jumping attack. The green potion turns Klungo invisible, however the formula is proven to be incomplete, as Klungo will become visible for a split second, giving away his location. The blue potion allows Klungo to create clones of himself. The first time Klungo can only create one clone. If he takes a hit, he then can create two clones, and finally three if he gets hit a second time. If the real Klungo, or the Klungo clones gets hit however, the clones will disappear. Hitting the clones will not result in a hit point, but a buzzing sound, indicating that Banjo and Kazooie had hit the wrong Klungo. Finally the yellow potion. Unlike the first three potions, Klungo doesn't drink the yellow potion. Instead, he uses them as projectiles. He also seems to have a near unlimited supply of yellow potions. At first as Klungo appeared to have poor accuracy when it came to throwing the yellow potions, during each boss battle, Klungo's throwing accuracy got progressively better.

Klungo also has an indestructible energy shield that is generated after taking a hit, and it can't be penetrated. But the effects of the shield will wear off through the course of time. 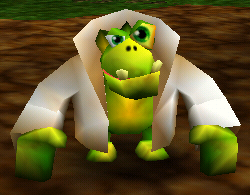 First encounter with Klungo in Banjo-Tooie. 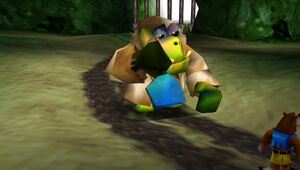 Second encounter with Klungo in Banjo-Tooie. 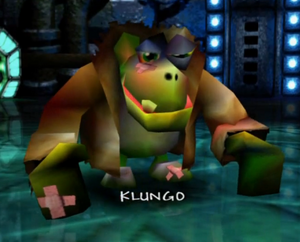 Third encounter with Klungo in Banjo-Tooie.
Add a photo to this gallery

Retrieved from "https://villains.fandom.com/wiki/Klungo?oldid=4098703"
Community content is available under CC-BY-SA unless otherwise noted.